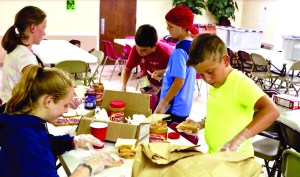 When failures in the mains cut off all the tap water in Owensboro, Kentucky, a little over a year ago, The Salvation Army mobilized volunteers to deliver bottled water to people in need. The helpers included about a half-dozen youth.

“As we delivered water, people asked us if we had food, too,” said Corps Sergeant Major Lori Thurman. “One of the teens turned to me and said, well, why don’t we have food?”

The sergeant major reached out to two pizzerias. The next day, the youth handed out water and pizza. City water was restored after several days, and the crisis passed. But the seed of an idea was planted.

Now, every Wednesday evening, eight to 15 young people in the Owensboro Corps CANteen Program get together to prepare and deliver food to more than 100 residents in need.

“The kids saw a need and wanted to help,” Sergeant Major Thurman said. “They really are the heart of this program. They do the hard work: Packing the bags, loading the van, cleaning up afterward. I just drive the van.“

Some of the youth are corps cadets. Others are from Owensboro High School, where Sergeant Major Thurman teaches social studies, or helpers at the summer day camp program.

One recent Wednesday, the Tri-State Food Bank donated pre-cooked pork burgers. A local bakery donated buns. The kids, working in the corps kitchen, heated the meat, put it on buns and packaged hot pork sandwiches with potato chips for that evening’s distribution.

Pizza also has been a popular menu item. Papa John’s and 54 Pizza Express are still donating pizzas certain weeks. Compass Counseling, a local counseling service, wrote a check for $180 to cover the cost of 30 pies another week.

Food goes to three populations: homeless residents; families in transitional housing – “parents and three or four kids in a one-bedroom hotel room”; and Somali, Burmese and Thai refugees who were settled in Owensboro and are struggling to make it in their new homeland, Sergeant Major Thurman said.

“We’re really trying to give them hope that there’s a way out of their situation,” she said. “I would like to see the people we are ministering to help us reach more people. They know where the others are.”

The weekly visits from The Salvation Army have borne fruit: Five children have started attending corps programming including vacation Bible school, Sunday school and, on Monday evenings, Sunbeams, Adventure Corps and Girl Guards. One man volunteered to ring bells at Christmas and has been attending the corps off and on; another applied to work in the thrift store.

Taking things to the next level, the corps is one of five finalists for two $100,000 Impact 100 Owensboro grants. The grant would go toward a kitchen upgrade so the corps can prepare more food and serve more people, as well as gym renovations. Grant recipients will be announced in October.

All this, because some young people wanted to make a difference.

“Kids want to help, they want to be involved,” the sergeant major said. “We’re just giving them the voice and the power to do it. They have great ideas; they just want to be heard.

“I never thought two years ago I’d be doing this, but through this food ministry, we’ve gotten to know a lot of people in the community.”

Stearns & Foster Donate $1 Million in Mattresses to The Salvation Army