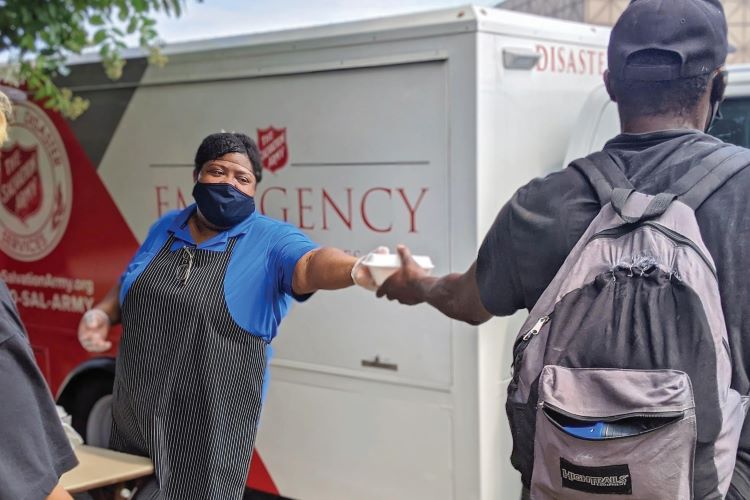 When a soup kitchen closed, The Salvation Army in Augusta filled the gap

A staff member of the Master’s Table in Augusta, Georgia, recently was diagnosed with COVID-19, forcing the soup kitchen to shut down for cleaning and everyone working there to quarantine – and putting its clientele at risk of hunger. The Salvation Army stepped up to the challenge.

“Some of the people who go to the Master’s Table for lunch are the same folks who come to our Center of Hope for dinner,” said Major Douglas McClure, Augusta area commander and senior Kroc Center officer. “These are our people. If our people need a meal, and there’s no place for them to have it, The Salvation Army gets involved.”

“Today we had chicken nuggets, tomorrow it’s hamburgers,” Major McClure said the first day of the feedings. “It’s basically EDS work for us. We cook and prepare meals in the Kroc Center, box them up, take them over and hand them out – obviously observing social distancing, with masks and gloves and such.”

The Augusta crew figured it was easier to serve food at the Master’s Table rather than have people walk about two miles to The Salvation Army downtown; and to use the Ray and Joan Kroc Corps Community Center kitchen so the operation wouldn’t affect children’s programs at the Center of Hope.

Plans called for The Salvation Army serving lunch through Friday and taking a break Saturday and Sunday; local restaurants were lined up to provide meals on the weekend. The EDS crew was to return Monday, July 27, to continue the midday feedings until the soup kitchen reopens.

“We’re The Salvation Army, and this is what we do,” Major McClure said. “We’re willing to step in and fill gaps in the community.”

The Salvation Army Continues its Service During Pandemic

The Salvation Army in Texas Ready and Prepared to Respond to Tropical Storm...
%d bloggers like this:
Scroll to top