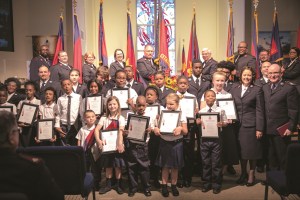 Commissioners Lyndon and Bronwyn Buckingham were welcomed by the USA South in a visit in late April that took them to the Alabama-Louisiana-Mississippi and Georgia divisions.

Chief of the Staff Commissioner Lyndon Buckingham and Commissioner Bronwyn Buckingham, world secretary for women’s ministries, began their visit as guest speakers for the quarterly meetings of the National Advisory Board in Birmingham, Alabama. The visit coincided with the Birmingham Area Command Annual Dinner attended by over 500 local supporters of the Army’s work and witness. In his dinner address, Commissioner Buckingham spoke of how the NAB event had energized them, highlighting the importance of advisors to the Army’s mission. He talked of meeting people with sincerity, passion, commitment, integrity, expertise and intelligence. He paid tribute to all Salvation Army advisory board members and other volunteers within the USA who give tirelessly to advance the mission. He called for all believers to always “Look Up!” fixing our eyes on Jesus, the author and finisher of our faith.

In Jackson, Mississippi, a capacity congregation assembled in the Jackson Citadel Corps building for the ALM Divisional Soldiers Rally. Music and creative arts were interspersed around prayer and testimony. Commissioners Buckingham enthusiastically enrolled 15 junior soldiers and 21 soldiers. In his address, Commissioner Buckingham referenced Paul’s letter to Thessalonica. He challenged the congregation with Paul’s challenge to the new church that as new Christians, all have a growing reputation – a model and example to the world. News of these early Christians was spreading everywhere. This was evidenced by the extent and furthering of their faith, their hope in Christ, the capacity of their love for the Lord and one another, and their anointing by the Holy Spirit. Public decisions were recorded as those responded to the call of Christ on their lives.

At “The World for God” meeting attended by the Georgia Division, THQ and Evangeline Booth College officers and cadets from both sessions, the Chief of the Staff visualized for those gathered the state of the Army, now in 131 countries. Commissioner Bronwyn Buckingham shared Scripture, and in her testimony highlighted the vision and planning for greater ministries for and by women in the future. A composite band, timbrel brigade and songsters blessed those present, and the Holy Spirit descended as the chief of the staff used 2 Corinthians 2:14 to capture the essence or aroma of Christ in this challenging world.

“It’s the aroma and fragrance of Christ that we Salvationists need to obtain. You are to be that aroma of Christ in your community,” he said. “Be the flavor of God in the world! In his presence, for his glory, and at his disposal.”

Christopher Priest is the Southern territorial director of communications. 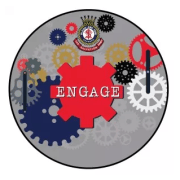 Soldiers have a role to play in Pathway of Hope
%d bloggers like this:
Scroll to top