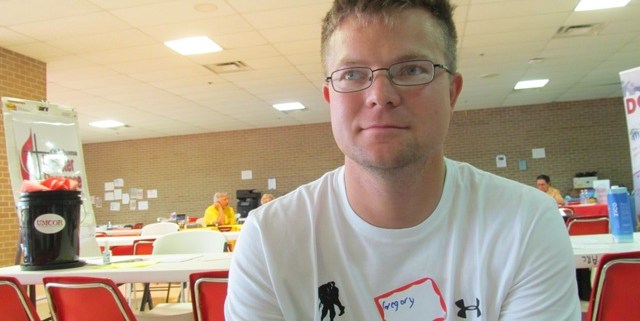 The following was contributed by Krachel Greenwood, E-Communications Manager for The Salvation Army Wisconsin and Upper Michigan Divisional Headquarters. Krachel has been serving with The Salvation Army’s Emergency Disaster Services (EDS) teams on the ground in Oklahoma since the disaster struck.

From the client side of the desk, Gregory Von-Dollen is just another smiling face sitting at the Multi-Agency Resource Center located at Westmoore High School in Moore, Oklahoma.

Von-Dollen, an Oklahoma native, was out of state when tornadoes touched down in May. But he knew he had to help.

“The whole purpose was for me to come out and help my community. Since being wounded it has become my sense of duty to return that service the community has given me,” Von-Dollen explains.

In October of 2009 Von-Dollen joined the United States Army. Thirteen months later he was involved in a motorcycle accident which severely injured his left leg. He broke his hip, received 2-3 fractions in his femur and 25+ breaks in his tibia. He underwent two years of limb salvage, but in June of 2012 an amputation was performed, due to building blood clots in his leg.

When Von-Dollen’s leg was amputated he was pushed to get back in the saddle.

For those stopping by Spc. Von-Dollen’s spot at The Salvation Army’s table, a genuine smile is a welcomed one.

“A lot of people are still at the point of not wanting to share. One woman wasn’t home but her son was. He dove into a small closet and after the tornado passed by a neighbor stopped by and heard him screaming. The neighbor broke through the sheetrock and helped him out,” he says.

Von-Dollen plans to volunteer with The Salvation Army for four days. He looks forward to finishing his leave by spending time with family before returning to Texas. 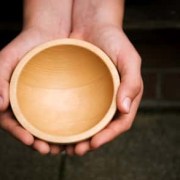 All the Latest Fast Facts on Oklahoma Tornado Relief Operations
%d bloggers like this:
Scroll to top