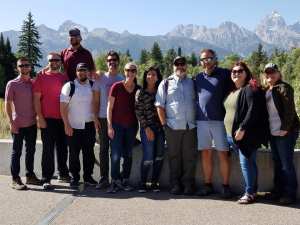 This summer, an 11-member group from the USA Southern Territory ventured to Bridger-Teton National Forest, outside of Jackson, Wyoming, to take part in the American Wilderness Leadership School (AWLS). The Salvation Army’s delegation, sponsored with a grant from Safari Club International, arrived through the TSA Outdoors program, and a meaningful, week-long journey was in the offing.

TSA Outdoors began in the USA Central Territory and, beginning in 2017, the Southern Territory adopted the enterprise with an eye toward making holistic outdoor opportunities available to individuals through camping, character-building and community center programs. In an overall sense, the initiative seeks to offer practical support and ideas for the interconnection of outdoor education and corps programming already in existence.

While TSA Outdoors initially centered on camping programs, that focus has expanded, and the early returns are encouraging.

“We are noticing how TSA Outdoors is bringing families together” said Captain Valentina Cantu, assistant territorial youth secretary. “There are no barriers to this. It’s really cool that everyone can be involved, and we see a lot of ministry opportunities that the Army can utilize in the present and future.”

Leaders from across the territory took part in the 2019 visit to the AWLS, and their trek included archery, fly fishing and other active undertakings. Beyond that, were plenty of opportunities to take in God’s creation through nature and, while AWLS operates beyond The Salvation Army, the training was specifically tailored to what the Army has to offer.

“We’re slowly seeing fewer and fewer children spending time outside,” said Captain Cantu. “The whole idea that is that nature is a wonderful thing, and we should be passionate about sharing that idea. Our passion goes beyond camp. This can be a 365-day kind of thing where we really push to get youth, and even adults, out in nature and growing closer to God.”

The TSA Outdoors program includes several key components, such as the concept of learning by doing, building positive habits, enjoying supervised activity and experiencing the outdoors in a fresh way. Camping curriculum is a natural fit, but progress is already being made in the South to incorporate the use of outdoor programming through other corps activities. Archery clubs are emerging in multiple corps and, soon, Kroc Centers, Boys & Girls Clubs and after-school programs could reap the benefits from expanded use of the program.

The 11-person delegation in 2019, made up of local and divisional leaders, was the largest from the Southern Territory in the three years since the partnership began and, in the future, the group could expand.

“If you’re passionate about getting kids to learn, love and explore the outdoors, this is a great opportunity to learn and to be inspired on how to do that,” Captain Cantu said. “It’s a chance to learn about resources that are available and there are so many things the Army can implement at various levels that involve the outdoors and beautiful ministry.”

Videos give toddlers a fun way to memorize Scripture