The following was originally posted on The Salvation Army Northern Division’s blog.
The mercury plunged to minus 6 the night Nicholas Conner slept under a bridge in Fargo, N.D. He was curled up inside his sleeping bag wearing street clothes, a jacket, hat and mittens. But the layers were no match for the biting cold. His chattering teeth sounded like a telegraph clicking SOS.
“I spent the whole night shivering – I might have slept two hours,” he said.
The crazy part is, Conner didn’t have to be there. He’s a full-time college student and could have been sleeping in the warmth of his dorm room.
Even more peculiar, he spent the next night in his car – and the following seven nights in a Fargo homeless shelter, where he ended up getting sick with a fever of 102.7.
If Conner didn’t have to live like that, then why did he?
One simple reason: He wanted to know exactly what homeless people go through so that he could serve them more effectively as a volunteer at the Fargo Salvation Army and elsewhere. No more, no less.
“Nicholas Conner is an incredible young man of God,” said Major Byron Medlock, Fargo Salvation Army administrator. “His passion for service is nothing short of inspiring, and he’s only 19.”
Pivotal moment

Conner’s homeless experiment took place in December 2012, several months after his first time serving hot meals at the Fargo Salvation Army – where he still volunteers to this day.
“There was a very pivotal moment that’s kept me coming back (to The Salvation Army),” said Conner, a North Dakota State University sophomore from Bemidji, Minn. “It happened when I met this homeless guy who started telling me about his life – how he served in Desert Storm, how we was in prison for 10 years, how he was an alcoholic.”
The man wound up showing Conner where he lived: A few blocks from the Fargo Salvation Army, underneath the evergreen bushes pictured above.
“He broke down and cried right in front of me,” Conner recalled. “It was my first real encounter with homelessness. I skipped my calculus class because of the conversation I was having with him.”
With that, Conner discovered a newfound passion: helping people who have nothing.
“I had to do more,” explained Conner, a devout Christian. “It ignited a passion in me for wanting to bring these people something and give them something to look forward to, to think about, to work for.”
Perfect fit

The Fargo Salvation Army is the perfect fit for Conner to carry out his passion for helping homeless people in the name of Jesus Christ. The place allows him to interact with the 100-plus homeless people who come there every weekday for a bevy of services: hot breakfasts and lunches, showers, clothing, counseling, spiritual support and – above all – love.
Conner serves breakfast or lunch there at least once a week (pictured).
“Afterward, I mingle,” he said. “I try to help people understand they’re not alone in this. These people really need support.”
Conner provides more of that support outside of the Fargo Salvation Army. He’s the founder of a student organization called Hands and Feet, a 32-member Bible study group that performs service projects every two weeks.
“We’re all about being the hands and feet of Christ,” said Conner, who plans to attend seminary after college. “Last year the service project everyone enjoyed the most was throwing a Super Bowl party for homeless people. We put the game on for them and served a bunch of football food.”
Conner doesn’t enjoy recognition, and agreed to be interviewed for this story on one condition: that God get all the credit.
“I am not anything special, I am just trying my very best to submit to God,” he said. “I believe in service that is selfless and humble.”
The Salvation Army couldn’t have said it better. Join us in that same spirit of service by getting involved. Doing so is easy: You can make a donation or find volunteer opportunities in your area. 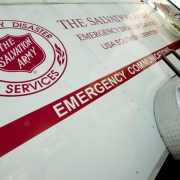 Joy in a Donut