One of the highlights of the year in my adopted hometown of Annapolis, Maryland, is Commissioning Week, when the Midshipmen 1st Class of the United States Naval Academy are commissioned as officers in the U.S. Navy.  The events of the week include the Color Parade, musical performances, award ceremonies and, of course, the graduation and commissioning ceremony, held in Navy–Marine Corps Stadium.  But the highlight of the week for us “townees” is a performance by the Blue Angels, the Navy’s flight demonstration team.

This world-famous squadron is renowned for its incredibly precise flying, with the F-18 Hornet fighter planes whizzing by at 700 miles per hour, as low as 50 feet from the ground, and sometimes only 18 inches apart. Blue Angels pilots are the “top guns” of naval aviation, among the finest pilots in the world.

The secret to the Blue Angels’ amazing level of performance is the rigorous debriefing process the team undergoes after every practice and performance. Each team member reports in minute detail his or her mistakes that day, and how they are going to correct them. Any mistake not known about or admitted to by a team member is then pointed out by the other team members.

No one – not even the commanding officer – is exempt from the process, and the team figuratively “takes off the rank insignia” so everyone can be totally honest with each other. This kind of constructive self-criticism is painful but necessary to improve the team’s performance. Each team member’s presentation ends with the phrase “Glad to be here,” to signify that they are grateful to be a member of the team and that they embrace the debriefing process.

For the Salvation Army to accomplish its mission, we Salvationists must also commit to constructive criticism – of ourselves, our structure, our methods, and our programs – to make sure we and they are as effective as possible. This is a difficult task for anyone, but it’s particularly hard for Salvationists because of the Army’s “quasi-military” structure, which inherently discourages input coming up from the bottom.

Leaders at all levels of the Army struggle to be vulnerable with those they lead, either out of pride, embarrassment or the belief that admitting mistakes or shortcomings makes them a weak leader. But Christian leaders are Christians first, and thus aren’t exempt from hearing the truth, as Paul makes clear in Ephesians 4:15: Instead, speaking the truth in love, we will grow to become in every respect the mature body of him who is the head, that is, Christ.” Avoiding constructive criticism from below makes leadership growth and maturity impossible.

Constructive criticism (not idle gossip, slander or bellyaching) actually builds up those with whom we minister. Do not let any unwholesome talk come out of your mouths, but only what is helpful for building others up according to their needs, that it may benefit those who listen (Ephesians 4:29). And, like the Blue Angels, we should always be “glad to be here,” grateful that we have the opportunity to minister to others through The Salvation Army and willing to admit and correct our mistakes and shortcomings so that we can better accomplish our mission. 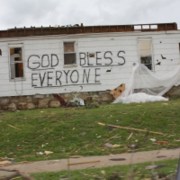 The Midwest takes care of its own

A path of persistence and hard work pays off for Salvation Army client The Salvation Army reaches out where help is needed
%d bloggers like this:
Scroll to top