LEARY, GA (October 24, 2018) — While hot meal service has been demobilized, The Salvation Army in southern Georgia continues to provide for those affected by Hurricane Michael. In Baker County, there are still an estimated 1,000+ people without power. Residents have struggled to clear the roads and gain access to services they need.

Benson and Dale Craft own the B + D Deer Processing Facility on their land in Leary, GA. Benson described waiting out the storm and watching giant pine trees bend until the tops were almost touching the ground. “I said, ‘If there’s ever been a time to pray, it’s now’.” They got up the next morning to assess the damage and realized they had lost 80% of their timber, but their house remained unscathed. It took two hours to clear the fallen trees to extricate their dogs from their pen, where they were miraculously unharmed, and another six hours to clear a path to the highway on which their property lies.

The Crafts have opened their processing facility and its coolers as a distribution point for Salvation Army goods such as lunch boxes, crates of water and Gatorade, and other snacks. They spent the morning on the phone and social media, spreading the word to anyone in need to come by and pick up supplies. Dale was close to tears describing some of her neighbors and the great need surrounding them. “This is a blessing. What else can you say? It’s going to be a blessing.”

How to Help:
The best way to help survivors and relief workers is to make a financial contribution. Monetary donations allow disaster responders to immediately meet the specific needs of disaster survivors.

Donate by text: Text STORM to 51555 to receive a donation link for easy mobile giving. 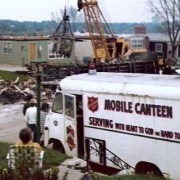