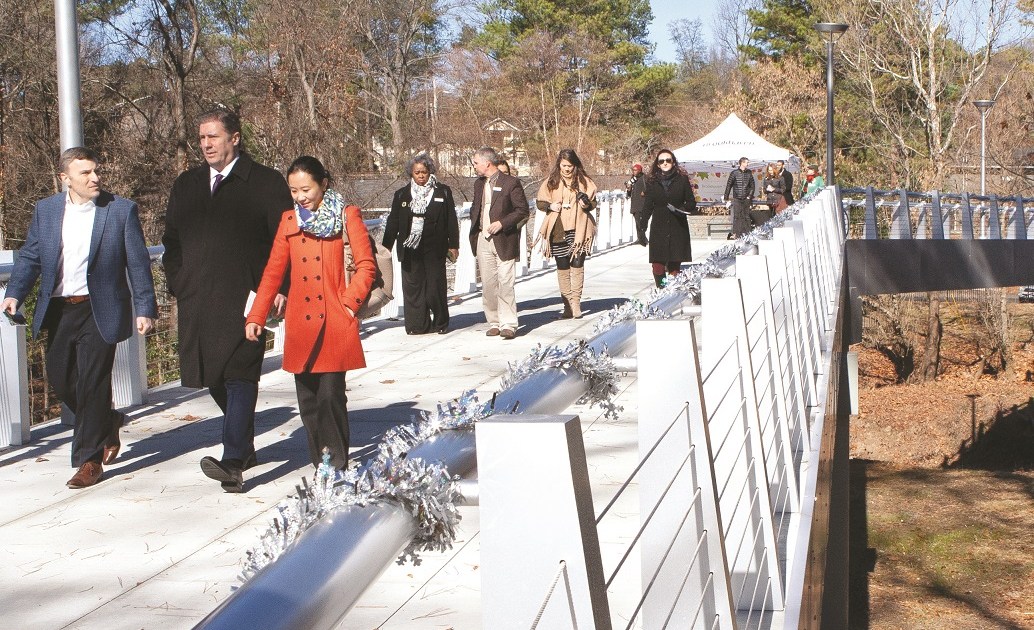 When dignitaries and residents of Brookhaven, Georgia, gathered to cut a ribbon and formally open the first phase of the Peachtree Creek Greenway, they paused to recognize a key partner in the $10 million project.

“Without their assistance and generosity, we would not be here today, and that’s The Salvation Army,” said Joe Gebbia, mayor pro tem of Brookhaven.

Phase I of the walking and bicycling path runs 1.27 miles along the North Fork of Peachtree Creek northeast of Atlanta, Georgia. Except when a heavy rain sends it over its banks, the waterway is only a few inches deep and about 30 feet wide. It threads its way behind apartment buildings, office complexes and The Salvation Army’s Southern Territorial Headquarters and Atlanta Temple Corps.

Until recently, the stream was an impassable thicket. Work crews last year chopped and cleared the vegetation, opened the creek bed to sunlight and hauled away years of accumulated trash. They carved into its slopes a 14-foot-wide paved trail with multiple access points and parking, including two on The Salvation Army campus.

At roughly the half-way mark, a bridge of concrete and steel was built to carry the path across the creek. Here, the city set up a white tent with folding chairs at the foot of the bridge for speakers and refreshments; the ribbon-cutting took place on the span.

“They were responsible for the North Druid Hills trailhead,” next to THQ, Gebbia said. “Also, we had a homeless population living along the creek, under bridges, and the charge of the (city) council was not to shuttle these people off, but to handle the situation holistically and with respect. The people of The Salvation Army gave us the assistance to really address that situation.”

The Red Shield Harbor Light Corps in Atlanta worked with Brookhaven to offer homeless residents a place to stay for up to six months; food, clothing and medical care; and for those wishing it, spiritual counseling, job training and help overcoming substance abuse.

The Army also made available a 14-by-160-foot retaining wall along the Greenway for a mural to be commissioned by the city and plans its own mural on the side of a warehouse building along the trail.

A future Phase II will extend the trail south into Atlanta, and Phase III, north to the cities of Chamblee and Doraville, for a total length of 12.3 miles. And at its midpoint, visible to thousands of passersby every week, will be The Salvation Army.

Blindsided but not immobilized: The Salvation Army finds new ways to serve amid a new normal

To Battle We Go: Flying a desk

A peculiar way of music

To Battle We Go: Marching Songs

SALVATION ARMY RELIEF EFFORTS BEGIN IN THE PANHANDLE IN THE WAKE OF HURRICANE SALLY.

Heroes with hammers and saws A good neighbor joins The Salvation Army’s stand against hunger in Tifton,...
%d bloggers like this:
Scroll to top