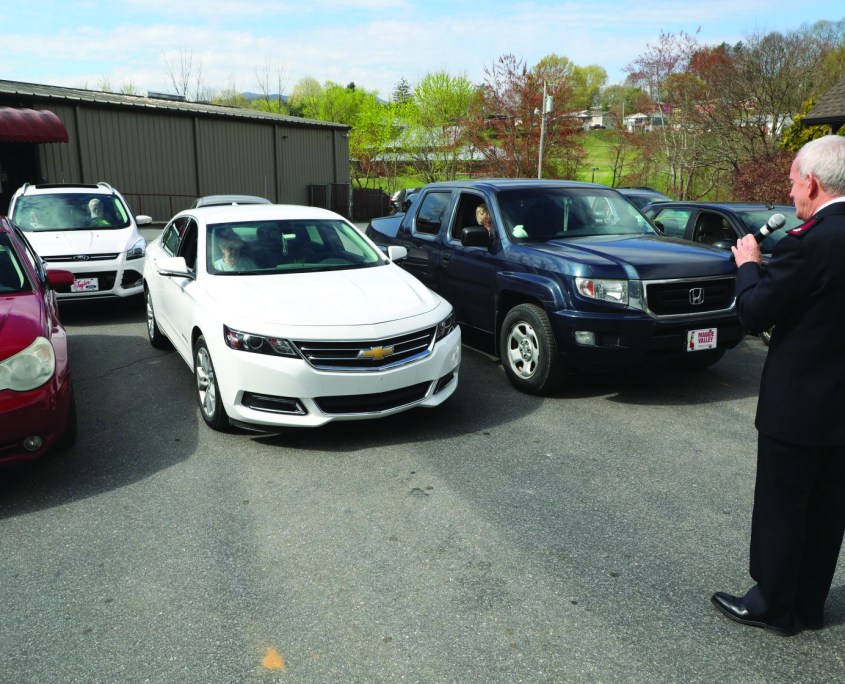 For those of us who are old enough to remember dive-in theaters, Major David and Debbie Cope in Waynesville, North Carolina, hatched an idea that could serve as a temporary fix to alienation now felt by corps members during the COVID-19 self-quarantine period.

“Major Debbie and I sure have been missing you,” Major David Cope texted his corps congregation the week prior to Palm Sunday. “We pray that during this time of havoc and confusion, you have been able to keep your focus on our mighty God and precious Savior. I know it’s been difficult.”

Some of the Waynesville Corps members have no access to the Internet, so phone calls conveyed the same news.

“We would love to try to meet for worship,” Major David said, “but we also want to protect everyone’s health. So we have an idea for worship in the (corps) parking lot.”

The plan called for everyone to arrive by 11 a.m. and remain in their parked cars, roll down the windows and participate in worship while continuing to practice social distancing.

Plans are to repeat the idea Easter Sunday – arguably the most important holiday on the Christian calendar.

Major David joked that as long as no one gets out of their car, its conceivable that some could even come wearing their pajamas. “But please do comb your hair!” he said, laughing.

The Copes have been delivering study sheets of Sunday sermons and Wednesday night devotionals during the crisis, reported Major Debbie.

“Most of our people are older, and don’t do online and techie stuff,” she said.

Moving forward with this idea may be a good alternative.