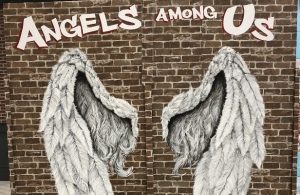 Year after year, The Salvation Army’s Angel Tree is placed in a relatively low-traffic area within the mall in Washington County, Maryland, prompting challenges with visibility and attention.

Locally, there is a huge presence of angel wings being painted on brick, and the area is a hot spot for social media posts featuring the backdrop. In short, the location was seemingly the perfect way to attract people and get The Salvation Army’s Angel Tree program on the radar in the community, leading Captains Jimmy and Ashley Taylor, corps officers, to spring into action.

Using foam board, wallpaper and creativity, the local Salvation Army made wings that were easy to transport. The Salvation Army’s red shield logo is included on both sides, so when people take pictures, the name and likeness of the Army is highly visible.

Next to the wings, a sign reads, “When you donate to The Salvation Army you become someone’s angel in our community. Help this Christmas season by adopting a child from our angel tree or donating to a red kettle. Be an ANGEL AMONG US in Washington County.”

The community’s response has been swift and notable, with the mall asking The Salvation Army to leave it up a little longer.

Giving Back and Doing Good in Victoria, Texas