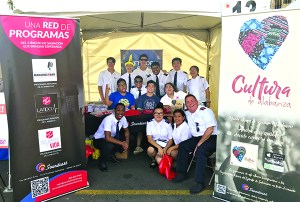 The Salvation Army introduces itself at Atlanta Latino Festival

Soundcast, Multicultural Ministries, the Atlanta International Corps and cadets from Evangeline Booth College teamed up to leave a lasting impact on guests attending Plaza Fiesta’s Mexican Independence Day celebration Sept. 15 in Atlanta. Plaza Fiesta is only minutes from territorial headquarters. This Spanish shopping mall is somewhat of a gateway into the Latino community in Atlanta. As you enter its doors, you are suddenly transported to a little Mexico, complete with shops, a hair salon and incredible food.

Plaza Fiesta hosts many festivals throughout the year. In 2018, the Mexican Independence Day event had over 60,000 in attendance. As The Salvation Army began developing its relationship with Plaza Fiesta, the plan was to purchase a vendor booth and hand out free “Cultura de Alabanza” CDs and water, share information about Salvation Army programs and worship services at the International Corps, and minister to those at the festival.

In August, Major Jerry Friday, territorial evangelism and adult ministries secretary, and Major David Repass of the Atlanta International Corps met with the manager of Plaza Fiesta, Cristina Bolaños, to brainstorm how The Salvation Army can impact this community.

“I often have lunch here on the weekends, and I see many young mothers who are working with their children behind the counter because they can’t afford daycare. How can The Salvation Army help families like these?” Major Friday said.

Major Friday and Major Robert Parker, Metro Atlanta area commander, hope to send at least 75 kids to camp next year from families connected to Plaza Fiesta. This is an under served community in our area, and Plaza Fiesta is welcoming The Salvation Army with open arms.

Major Friday brought youth from his corps, and they quickly took ownership of this opportunity to love on the community. By the end of the day, they had given away over 1,400 CDs and just as many flyers about Salvation Army programs. We look forward to growing this relationship with Plaza Fiesta as these are the families in our own backyard.

Friday is National Donut Day: Celebrate With Us Today & Tomorrow!

A people of peace: The General’s Christmas message