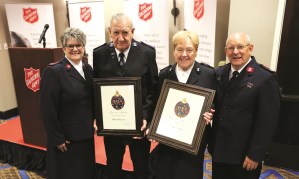 More than 90 years of committed service was honored by The Salvation Army in Waco, Texas, recently as it recognized the dedicated work of long-time employee Janet Harrison and EDS volunteer Wayne Branscum. Each received an Exceptional Service Award, signed by National Commander Commissioner David Hudson.

In 1982, Janet Harrison was appointed the director of the Fresh Start Program at The Salvation Army in Waco and would go on to serve faithfully for 35 years. The program assists inmates from the federal prison system as they transition from incarceration to freedom. Low risk inmates are assigned to the program by the Bureau of Prisons, and Salvation Army case workers help them acquire state IDs, prepare resumes, learn how to interview for employment and acquire other skills to give program participants the best chance to transition successfully.

Since its opening in 1983, more than 3,000 individuals have transitioned through the Fresh Start Program, with a success rate of 86 percent.

“It has been a pleasure to see men and women come through our program and make positive changes to their lives,” Harrison said. “One young man accepted Christ into his life while in our program and later became an ordained minister and now visits federal and state prisons throughout Texas. That’s the kind of life-changing impact the Fresh Start program has.”

Harrison is a faithful soldier and bandmaster of the Waco Corps. She received The Salvation Army National Award for Excellence in Corrections in 2006.

Wayne Branscum discovered his passion for serving others when he was a teenager. “I remember going to help at a large fire where we served coffee and food to the first responders. I was only 16,” he said. “We spent the night and worked well into the next day.”

That was the beginning of a lifetime of volunteer service.

Branscum, the assistant corps sergeant major at the Waco Corps, reflects on his 55 years of service in the mobile kitchen.

“Over the years I have deployed to serve after hurricanes, floods, tornadoes, fires and other disasters in Texas and around the Southern Territory. I went to Panama City after Hurricane Michael as a driver and was responsible to keep the mobile kitchen fully operational. I was blessed to also deliver emotional and spiritual care to those affected by the storm – to talk with, listen and pray with people.”

“Wayne and Janet both exhibit the very spirit of salvationism,” said Major James Taylor, Waco area commander. “Their service has always been for the betterment of mankind with the goal of pointing people towards Christ. We say thank you for their commitment and faithful dedication and look forward to new opportunities of service in the future.”

Staying in touch: Hernandez keeping ties with The Salvation Army as he serves his country