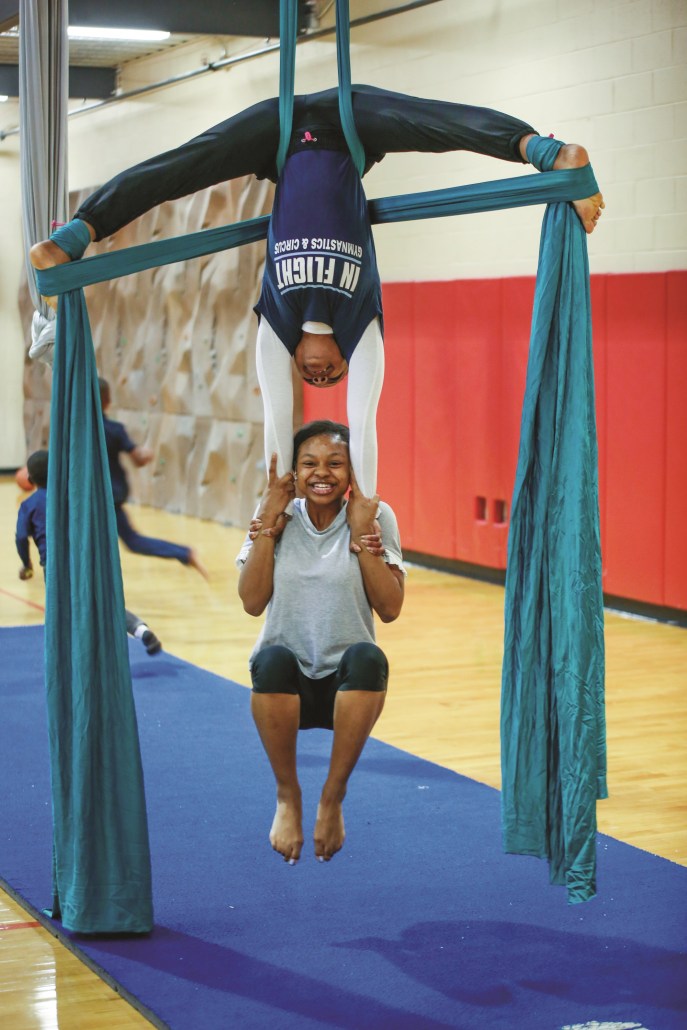 When a group of at-risk teenagers in Atlanta, Georgia, learned this winter they’d be going to a Kroc Center to learn circus arts, most were less than thrilled. Circus, they said – isn’t that elephants, clowns and flying trapezes?

Well, not so much elephants, but it takes talent and hard work to be a clown, and a trapeze is more than a person on a swing – think acrobatics, ropes and silks.

“They love it. They didn’t know they were going to love it, but they do,” said Traci Willis, director of the JourneyZ program of Chris180, a social services agency that works with youth in group foster homes. “They’d never have learned how to do the trapeze or ride a unicycle if they weren’t here. It’s not as hard as it looks. Doing it builds self-esteem, confidence, all types of things.”

Nineteen young people are enrolled in “social circus” at The Salvation Army Ray and Joan Kroc Corps Community Center in Atlanta’s Pittsburgh neighborhood. The program came out of the Cirque du Soleil performance troupe of Quebec, Canada, and its Cirque du Monde, which uses circus arts to reach young people around the world.

“Social circus aims to ensure the all-around development and social inclusion of people at risk, especially youth,” says the Community Worker’s Guide of the Foundation Cirque du Soleil. “Precisely because it leaves room for freedom and creativity while demanding tenacity, perseverance and discipline, social circus empowers participants to use their marginality to express themselves and establish a new relationship with a society that has often excluded them.”

Benjamin Scholes, director of operations at Kroc Atlanta, said social circus “is an intervention program for our children most at risk, to give them a safe place to learn circus arts and to fold in social workers to help them. We go into the schools and seek out local groups who can tell us the kids having the most trouble in school, who are going through something traumatic, who need some adults to come around them in life and get them to the other side of whatever they’re going through.”

Blake Lanier, a psychologist and therapist, explained why he brought the social circus idea to the Kroc Center.

Lanier’s “aha” moment came when he began working with the Cirque du Soleil global citizenship team. “I saw their model of using the circus as psychosocial and community intervention absolutely had the possibility of being just as effective as the therapy I had been doing for many years … a way to reach kids who didn’t tend to respond well to the traditional, office-space type of therapy.”

For young people, he said, circus training “provides grace and development with fine motor and gross motor skills; it provides life skills, such as communicating with others, problem solving, grit and perseverance; and certainly it offers empowerment and a way to find their voice. It’s unlimited, the number of skills you can transfer from learning circus, to life.”

The Kroc Center piloted its first social circus last fall, working with youngsters in elementary through high school. This winter, it’s working with teens about to age out of foster care. Chris180 brings the students, and InFlight Gymnastics provides the training.

Classes meet twice a week for two hours in the evening. Students first eat dinner in the dining room, then go to the gym for “circle time” in a big group, and finally, break up for instruction in areas that interest them – from tumbling to trapeze to juggling to plate spinning. They may work in small groups, learning about trust, responsibility and camaraderie.

“We try to use the circus as a way to foster their imagination,” said Meredith Gordon, the director of clowning. “Most of what we do involves something physical. When teaching a lesson, kids can understand with their bodies as well as their minds.”

Michael, 17, is an enthusiastic learner; he’s been in love with the Big Top since attending a summer circus camp. “I want to learn juggling – bean bags, bowling pins, basketballs, anything. It’s one of the things that got me interested in the circus.”

A semester runs for 17 or 18 weeks and culminates in a performance, awards and a party. The program is free to the young participants; The Salvation Army pays the salaries of trainers and social workers. An outreach to potential funders will begin soon.

It so happened that during last fall’s session, Cirque du Soleil was performing in Atlanta. Of course, the social circus students got tickets to a show.

“All the skills they were working on, they were able to see on stage,” Scholes said. “The light went on: This was something more than playing in a gym.”

“There is a chance some child will find a path for themselves in the circus arts. But this program is more about developing relationships, helping a child work through a short- or long-term trauma, providing them an outlet to express themselves in a safe yet seemingly dangerous atmosphere, and to give these children a chance to succeed in a non-traditional area.”

The Salvation Army Serves in the Dark

Healed and made whole: An Easter message from General Brian Peddle

The Salvation Army Prepares to Respond through Forecasted Severe Weather
%d bloggers like this:
Scroll to top