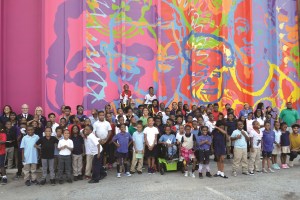 Taking it to the wall: Art as ministry

Few people outside The Salvation Army may know of the Southern Territorial Headquarters complex in Brookhaven, Georgia, tucked behind the Atlanta Temple Corps near North Druid Hills Road and Buford Highway northeast of Atlanta.

But that’s about to change with the completion of a public walking path and a recently announced competition to design a mural to go on the blank wall of a THQ building on a bluff overlooking the trail (left and above).

The Commissioner’s Office has announced a contest to design a piece of original artwork for the side of a warehouse in the lower parking area of THQ. The building is next to a small public parking lot and access ramp and stairs to the soon-to-be completed Peachtree Creek Greenway of the city of Brookhaven. Prospective muralists have a canvas 55 feet wide by 25 feet tall to work with.

“The idea originated with the Commissioners Willis and Barbara Howell,” said Bethany Farrell, territorial creative arts director. “Murals and street art are an exciting medium that have really taken off on Buford Highway and in surrounding areas of Atlanta, and many tourists and locals go out of their way to take in what’s being added around the city.

“With the creation of the new Greenway, our building has become a blank canvas that can reach thousands of people each week. It gives us an opportunity to introduce The Salvation Army to the community and share the gospel story of Jesus in a vibrant and creative way.”

The mural competition welcomes all artistic media and skill levels, but submissions must be in a high-quality digital format; entrants can send a photo of their artwork, if that works best for them.

“We understand that not every artist who submits artwork would be able to paint a mural on a giant wall as they can on a piece of paper,” Farrell said. “We have ways of working with the selected winner – for example, doing screen printing or hiring a local muralist to replicate their work on a grand scale. So anyone can send in a submission.”

Contest entries are due by Dec. 31. A mural committee made up of Southern Territory creative arts staff will review entries and select a design to be presented to the commissioners. The mural will be unveiled during the June 5-7, 2020, weekend of the Call to Mission: Southern Territorial Congress.

The THQ mural is one of two planned next to territorial headquarters. Brookhaven has applied for a $30,000 grant from the National Endowment of the Arts to cover half the cost of a city-commissioned mural to be applied to a 14-by-160-foot retaining wall owned by The Salvation Army.

The wall is off the North Druid Hills entrance to THQ, where a Greenway trailhead and parking lot are being constructed. The Brookhaven Arts Advisory Committee will select an artist and design to recommend to the City Council. 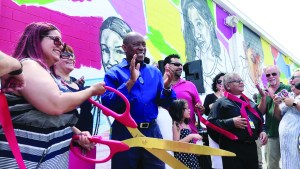 Houston — The murals decorating The Salvation Army Family Store on Bissonnet Street originated with the “Complete Communities” initiative of Mayor Sylvester Turner and a two-year effort by UP Art Studio and city liaison Veronica Hernandez to use art to beautify the Gulfton neighborhood and deter graffiti. UP Art secured grants of $20,000 from Target + KaBoom! and $10,000 from the City of Houston + Houston Arts Alliance. Chicago artist Rahmaan Statik worked with Braeburn Elementary School students to design 12-by-12-inch cloth panels incorporated into the main mural. Two additional murals were created by Gelson Danilo Lemus, a Houston street artist also known as w3r3on3, and international pop artist Denial. Mayor Turner (in blue shirt) and community leaders have a ribbon-cutting and dedication of the murals on May 26, 2018.

Atlanta — Majors Bob and Kathy Parker join children at The Salvation Army Bellwood Boys & Girls Club in September 2017 to celebrate the completion of a mural by artist Joe Dreher and the WonderRoot community arts center. “We were going back and forth what we wanted on the outside, some color to add life to the building, and we wanted to keep the kids involved – so we thought, why not use some of the images of the children in the summer program?” said Joshua Dickerson, executive director of The Salvation Army Boys & Girls Club of Greater Atlanta. The artwork incorporates kids’ faces and the words, “Life, Faith, Trust, Hope.”

Richmond — The Boys & Girls Club murals were executed in the fall of 2010 and spring of 2011, a project led by Hamilton Glass assisted by Soleil Paden and Lizzie Gray with local partner ART 180. “The artist made an outline of a couple of things, and the children filled it in. It was cold, they had coats on painting, and it showed their commitment to the project,” said Hugh Jones Director of The Salvation Army Boys & Girls Club of Richmond. “It’s added a lot to the building and made it more kid-friendly. The children may not know what’s inside, but when they see the artwork, they know it’s for them.” 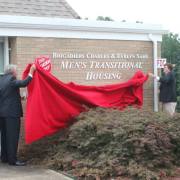 Kettles offer donors ‘bump and pay’ option The Salvation Army is cooking in style after a prayer is answered in Owensboro,...
%d bloggers like this:
Scroll to top