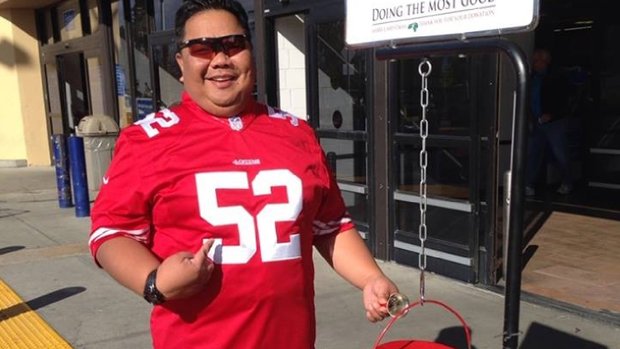 COLTON, Calif.—Salvation Army Maj. Marcelino “Butch” Soriano got a jump on ringing in the New Year this holiday season by ringing a bell for a record 105 consecutive hours outside a Wal-Mart in Colton this week.
The San Diego man’s reward: An estimated $2,700 he raised for charity and his name in the Salvation Army’s bell-ringing record book alongside those of fellow ringers James Brickson of Albert Lea, Minn., and Andre Thompson of Tyler, Texas, who matched him hour-for-hour.

“I feel a little bit tired, not as tired as I thought I would be,” he told UT San Diego ( http://bit.ly/1dZ4MYk) after putting down his ringer at 6 p.m. Saturday. “I’m excited the other people all agreed to stop at the same time, so now we have a three-way tie.”

He had originally planned to go for 100 hours, which would have shattered the old mark of 80 that was set last year. After reaching that mark, he considered ringing on until midnight before reaching agreement with his fellow ringers to stop at 6.

There were six contestants when the competition began Tuesday morning.

The rules allowed each ringer a five-minute break every hour that could be rolled over if they chose. Soriano, 46, would save his up so that he could take a 20-minute nap each day.

He said he never considered stopping, not even after someone stole his laptop before dawn Saturday.

“I’m doing great!” he said later Saturday. “People are coming up to me saying, ‘I saw you on the news, go for it, we know you can do it.'”

We are just past  the 24 hour mark of our World Record Bell Ringing contest and four bell ringers are still ringing strong! 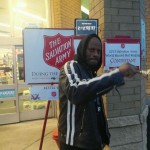 Contestant Andre Thompson of Tyler. TX is still up and going outside in front of Walgreens. He’s very motivated and physically still feels great!

Sprits are looking good so far, “I love this! My body is really holding up well”, says contestant Andre Thompson of Tyler, TX.  “I think the record is mine. I can do all things through Christ who strengthens me! In the end it’s mind over matter!” 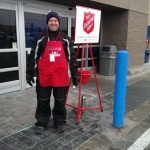 Lt. Rob Lawler in Helena, MT is still smiling while ringing in NINE degree whether. Brr! 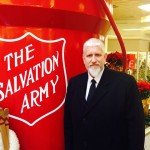 We thank Captain Jones and Quinton for their valiant effort raising awareness for The Salvation Army!
Captain James Brickson is bringing joy at Northbridge Mall in Albert Lea. MN.

We are grateful for each of our participants. Their incredible effort will help The Salvation Army provide assistance to millions in need this Christmas and all year round.  So thank you!

Join in the conversation and support these volunteers with #Ringiton on Twitter.
And don’t’ forget to check back here for updates! Visit: www.Facebook.com/SalvationArmyUSA and www.Twitter.com/SalvationArmyUS for all updates.
Keep up the great work! 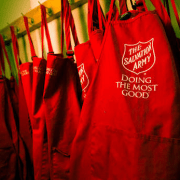 Contestants must brave the elements – such as weather, fatigue, and hunger – while ringing a bell continuously, and are allowed five minutes of rest for every hour of ringing. Last year, two-year reigning champ Darrell Tureskis of Springfield, IL tied the record at 80 hours along with Jason Perkins of Suisun City, CA and Ryan Gass of Roswell, NM.

Here are this year’s brave contestants:

“For years now we have staffed our kettle locations with 100% volunteer participation, that allows for 100% giving to support the need and it allows for the opportunity to give when a person’s not able to even financially give, volunteer!” said Brickson. “This is not a community that is industrial or flooded with huge factories but we are HUGE with heart, I want to celebrate that.”

Captain Jones wants everyone to know that she believes in the Army’s mission so much that she will stand as long as she can at a kettle in order to raise awareness for the immense need in her community, and to raise funds so the Army can continue to meet those needs!

As the Divisional Finance Secretary for the Sierra Del Mar Division of The Salvation Army in California, Soriano was a participant in the World Record Bell Ringing Contest in 2011 and rang for 51 hours at a location in San Francisco. His main purpose for competing is to raise awareness of the mission of The Salvation Army.
He is ringing at a location outside of a metropolitan area this year because The Salvation Army serves in communities that are sometimes forgotten. He loves the Lord and desires to bring honor and glory to His name in all he does.

Andre Thompson, aka “Exalt”, promotes the gospel of Jesus Christ through Gospel Rap. After taking a tour of The Salvation Army’s facility in Tyler, TX, he was spurred to give back in a larger way by volunteering to participate for this contest. He hopes to help raise awareness and money for The Salvation Army in Tyler, and his only request for participation is that God gets all the glory!

The question is: will he rap during the contest? We hope so!

Originally from Phoeniz, AZ, Quinton is a 19-year old student at the College of Sequoias with a passion for Jesus and people. He sees this challenge as an opportunity to learn and help others in need.