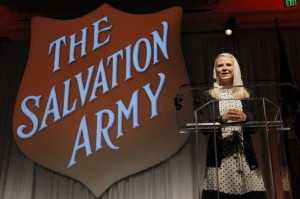 FORT WORTH — Inside a tent pitched on a Utah mountainside, moments after she was sexually assaulted by her kidnapper, Elizabeth Smart was overwhelmed by shame.

Just 14 and abducted hours earlier from her bedroom, she wondered if anyone would even search for her if they knew what had just happened.

Stories she had seen on the television news about kidnapped and murdered children flashed through her head and she wished she “was in heaven with them.”

“I remember lying on the floor of that tent feeling so worthless, crushed,” Smart told an audience at the Omni Fort Worth Hotel during the Salvation Army annual luncheon Wednesday. “I just didn’t feel that I could ever be worth anything.”

But Smart, whose abduction and rescue a decade ago captivated the nation, said she overcame that feeling with memories of her family’s love. She became determined to see them again, a sense of purpose that she hoped Salvation Army clients would remember as they battle their adversities.

“Because I found something worth living for, I was able to decide that no matter what happened, I would survive,” said Smart, who is now 25. “No matter what I had to face, I would do it as long as it was within my power. Somehow, I would see my family again.”

Smart’s speech was the main feature at the Salvation’s Army’s Doing the Most Good luncheon. The event raises money for Salvation Army programs, such as homeless prevention, addiction treatment, food pantries and supportive housing.

Smart’s abduction June 5, 2002, is well-known. Brian David Mitchell, a homeless street preacher, broke into her family’s Utah home while everyone slept, took her into the nearby mountains, sexually assaulted her and held her captive for nine months.

His wife, who helped keep Smart captive, was sentenced to 15 years.

Smart, who married 14 months ago, has since helped promote legislation to prevent abductions. She also speaks to recovery organizations nationwide.

On Wednesday, she described growing up with strict but loving parents and brothers who teased her.

The night she was kidnapped she had fallen asleep as usual in the bedroom she shared with her sister.

She awoke to a knife pressed to her neck and the sounds of a man’s voice.

Smart said she had always been warned not to talk to strangers, never get into their cars or help them look for lost puppies.

“No one ever told me what to do if someone broke in and had me at knifepoint,” she said. “I couldn’t believe it was real.”

Smart recounted being forced to walk up the mountain behind her home, crawling through a narrow ravine and finally reaching a remote encampment where Mitchell’s wife waited. At one point she recalled telling Mitchell that, if his intent was to rape and murder her, to just do it now.

During the next nine months, Smart was forced to travel to California and eventually back to Utah with her captors. She recalled once getting a meal at a Salvation Army shelter when Mitchell’s group had no food. And she recounted the events of March 12, 2003, the day she was rescued by police and reunited with her parents.

“I remember thinking if anyone ever asks me how to describe this moment I can in one word: Heaven,” she said. “No one had ever looked so beautiful to me as my mom did.”

During her recovery, her mother gave her advice that she followed. She told Smart that her kidnapper was evil and what he did to her was wicked.

“Then she said ‘The best punishment you could give [Mitchell] is be happy, move forward with your life and to do exactly what you want to do,’” Smart said. “‘Because it would be very easy to live in the past, to dwell on what happened to you. But that would allow him to take more of your life.’

“She was so right. … You’re not helping yourself out by holding on to the pain and the misery. You have to move forward.”

Chattanooga, TN – The Salvation Army’s ReCreate Café, at 800 McCallie Ave., will host a free screening of “The Candy Shop,” a film which exposes the epidemic of the sexual exploitation of children, on Wednesday at 7 p.m. The screening is made possible by Second Life of Chattanooga and Street Grace.

There will be a question and answer panel discussion afterwards with leaders who are fighting human trafficking locally. The panel will also include Alesia Adams, the Salvation Army’s territorial services coordinator against human trafficking.

For more information contact Tenika Dye at 756-1023 or visit www.csarmy.org.