It’s Hunger and Homelessness Awareness Week, a week dedicated to awareness, education, homelessness, food insecurity, and poverty as it affects those in our community and world.

With Thanksgiving right around the corner, this week provides an excellent opportunity to donate a box of canned goods and other nonperishable items to your local Salvation Army to ensure a Thanksgiving meal for a family in need. Visit www.SalvationArmyUSA.org for a list of locations near you. 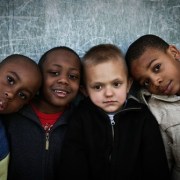 Social media was abuzz yesterday with posts about the first day of school; excited parents posting pictures of their kids standing ready for the bus, and students expressing excitement or dread about the start of a new academic year. But one topic you likely won’t hear your friends talking about on social media is food insecurity, a rising concern for families struggling in the Great Recession, as well as schools.

And the numbers are rising. Between 2007 – 2011, the percentage of U.S. households with food-insecure children increased from 8.3 to 10 percent, according to a report from USDA’s Economic Research Service (ERS).

Feeding America also tells us that children from food insecure households– where parents struggle to meet basic food needs –  are at a disadvantage in their academic development compared to other students, which ultimately makes it difficult for them to achieve the same level of development as their fellow food secure peers.

But here’s the good news: The Salvation Army is dedicated to helping families meet this basic need, and supporting healthy children in the classroom. One way we do this is through your donations to our food pantries, which provide groceries for individuals and families in need and are essential to battling food insecurity.

I’ve noted several news stories as of late about Salvation Army branches seeking food donations from their communities. At many locations, the pantry supply is running critically low, likely due to the time of year; people are enjoying the end of summer and gearing up for the busy months ahead rather than donating.

The Salvation Army Food Pantry in Panama City is just one example where food is in short supply. This location feeds up to 15 families daily through donations. If you live in Panama City, click here to learn how you can donate today.
Your support is needed to ensure that our shelves are stocked so we can meet those needs.

To donate nonperishable foods to your local Salvation Army food pantry, check out our main website for a list of locations near you:  www.SalvationArmyUSA.org.
Or, click here for other ways to show your support. In 2011 alone, we served almost 60 million meals to individuals and families in need.

In 2012, The Salvation Army and the Tallahassee Sustainability Group of Tallahassee, Florida joined forces to create a community garden in an effort to fight poverty and hunger. Their vision is to help families in need to grow their own food, help provide The Salvation Army with fresh produce for the food pantry boxes and to help families learn new skills to gain self-sufficiency.
The garden was originally located in a little corner of land behind a local Salvation Army Family Stores and has since expanded to create more opportunity for the public to get involved.
The Tallahassee Sustainability Group has become a tremendous partner in The Salvation Army’s fight against hunger and has taken strides in educating the public about food and agriculture, increasing accessibility to fresh, healthy, food, and strengthening communities by means of urban farming.
This wonderful program is in the process of expanding to other locations.
Please enjoy this incredible video, “As We Grow”, produced by the Florida State University Media Department.

To learn more about The Salvation Army visit: www.salvationarmyusa.org

Filed under Doing The Most Good · Tagged with FSU, hunger, poverty, Tallahassee, The Salvation Army

TUPELO, Miss. (WTVA) – Polly Smith with The Salvation Army in Tupelo cooks breakfast, lunch and dinner there daily to feed 150 people or so.

Smith said, “I serve chicken dressing, greens, cabbage, barbecue, and anything just about.”

Dorman said, “Fifteen dollars can feed our lodge and a person staying overnight for a day.”

The lodge that’s made for 19 currently houses about 25 people nightly.

The food pantry shelves also are able to stay stocked through the annual Empty Bowls donation.

Dorman said, “Our founder, William Booth, had a little slogan: Soup, Soap and Salvation. You feed them, clean them, and then you can talk to them about Christ. Someone hungry is not going to listen to you.”

Back to the kitchen, that’s exactly why Polly Smith says she tries to make the best meal she can for those who depend on it daily.

Because of the generosity of so many during events like Empty Bowls, The Salvation Army says it’s working to make sure no one has to face a day hungry. 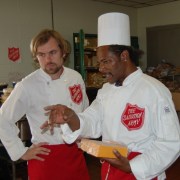 This is the philosophy that inspired The Salvation Army’s Culinary Training Program in Louisville, KY, an intensive 10-week course which offers individuals who are struggling with homelessness, poverty and addiction, the opportunity to learn the skills necessary to obtain an entry level position in the culinary industry.

Upon completion of the course, culinary students have the opportunity to work with the city’s top chefs in creating a six-course meal for the annual Chef’s for Hope gala that raises essential funds for the program. With 125 foodies in attendance at last week’s gala, the event raised approximately $31,000 which will support two 10-week sessions this year.

“Students in this program take the opportunity and run with it,” said Lanham. “Chefs for Hope is really changing lives.” 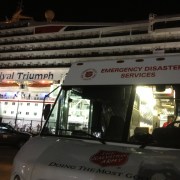 After members of the MDWO helped put together a warm Valentine’s Day lunch, Dolphins players – including cornerbacks Richard Marshall and Kelcie McCray, tackle Nate Garner, running back Jonas Gray and wide receiver Brian Tyms – made sure that everyone had something to eat, with an assist from TD, the Dolphins mascot.

The 38th Street branch of the Miami Salvation Army, which is celebrating its 100-year anniversary serving the Miami-Dade community, houses 216 residents regularly – these are individuals and families that need a boost to get back on their feet, and The Salvation Army is there to lend a helping hand.

On Thursday afternoon, there was what Salvation Army Director of Development Judith Mori called a “full house,” a group of about 100 people, on hand to enjoy a warm meal and some Valentine’s Day fun.

“It’s very special and it’s very important for them to know that society hasn’t forgotten about them, and especially that the Dolphins are here to support,” Mori said. “Having them helps us set the mood, and also it creates the sense of community we always look for in this situation.”

Members of the Miami Dolphins Women’s Organization spent some time in the kitchen, helping put together a special Valentine’s Day lunch. When everything was hot and ready, residents lined up one by one, grabbed a tray and met with the players.

As the cafeteria filled up, Marshall, Garner, Gray and Tyms began to pass out some Valentine’s Day treats, spending one-on-one time with almost everyone.

Garner enjoyed the opportunity to put a smile on the faces of those he interacted with.

“It’s nice to spread love in the community here,” Garner said. “Just come out and try to make people safe on Valentine’s Day, make them have a good day – give them some candy and hopefully a little bit more joy in their life.”

The impact of what the Salvation Army residents receive extends beyond simply a steady meal or a place to stay; this is a safe haven where they are expected to dedicate themselves to whatever may be ailing them. Each man, woman or family is assigned a coach that makes sure they remain motivated to accomplish some sort of goal, whether that’s finishing up their education, securing a steady job or something of that nature.

For one day, the Dolphins were able to be part of this process. With their help, a normal Thursday afternoon turned into a festive one.

If it were an ordinary day, the residents may have been more reserved, less likely, perhaps, to interact with each other while they ate. But Thursday was different – laughter filled the cafeteria, bouncing from wall to wall, cameras flashed, nearly everyone had a smile on his face.

There was a tangible synergy that Mori said is key to raising spirits at the shelter.

“It creates a sense of community because they get together, they share things, they share a picture, they share a smile and they laugh together and therefore they create real friendships,” Mori said. “This is very important because this is a safe environment, so it’s good for them to be friends with people who are also going through the same situations and need to be motivated together.”