The Salvation Army is celebrating National Thrift Store Day at The Salvation Army Family Store. All over the world there are millions of people who love to bargain hunt for treasures and who love to find an item to refurbish at a great price…why not enjoy free fresh popcorn, a bounce house for the kids, amazing deals, and be able to help our community at the same time?! It’s bargain hunt day fun for the entire family!

For more information about The Salvation Army programs, services, or to volunteer please call our main office at (806)373-6631 or visit our Facebook page at https://www.facebook.com/SalvationArmyAmarillo. Secure donations can be made online at www.salvationarmytexas.org/Amarillo or by calling 1-800-SAL-ARMY(Specify Amarillo).

In partnership with The Salvation Army, Target is providing a memorable back-to-school shopping experience that equips children in need with all the essentials for a successful academic year. And the campaign, which awarded 12,000 children, affiliated with Salvation Army youth programs, with $80 gift cards to shop for clothing and supplies with the help of a designated chaperon, is doing more than filling backpacks.

Our back-to-school program with Target provides emotional encouragement for families in need. These kids are getting jazzed for the school year ahead while parents are relieved of the rising costs associated with the annual shopping tradition.

Want to support The Salvation Army’s back-to-school programs? Find your local Salvation Army here.
With the help of volunteers, students from Norman, OK checked off their teacher’s lists by picking out supplies – and their favorite clothes – courtesy of Target’s generosity.

Check out this touching video from The Salvation Army Arkansas-Oklahoma Division, and help us say “Thank You” to Target by ‘Liking’ and commenting on their Facebook page (https://www.facebook.com/target). 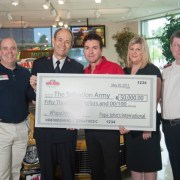 Town Hall meeting at Papa John’s, Monday, May 20, 2013 in The Hub on the corporate campus in Louisville, Ky. (Photo by Brian Bohannon)

Our friends at Papa John’s Pizza handed over a $50,000 check donation to The Salvation Army during a presentation at the company’s Louisville, KY headquarters on Monday, the result of both a highly successful social media campaign and the dedication of partners in “Doing the Most Good”.

The February social media campaign asked Facebook and Twitter users to ‘like’, ‘share’, and comment on their pages to raise awareness of America’s hunger problem, with every good word, re-tweet and thumbs up garnering a $1 donation for The Salvation Army’s feeding programs. Thanks to the power of social media, $50,000 was raised in one day by compassionate supporters and pizza lovers alike.

The Salvation Army serves approximately 60 million meals to Americans each year because of supporters like Papa John’s Pizza. We are beyond humbled by the company’s extreme generosity and commitment to feeding Americans in need.

Please help us thank Papa John’s Pizza and Papa John himself on Facebook or on Twitter using #PapaJohnCares.