FRISCO, Texas (November 14, 2017) –  Academy of Country Music’s Male Vocalist of the Year Thomas Rhett will perform LIVE at AT&T Stadium during the nationally televised halftime of the Dallas Cowboys game against the Los Angeles Chargers on Thanksgiving Day, kicking off The Salvation Army’s annual Red Kettle Campaign. Donations to the iconic campaign help provide shelter and meals for the homeless and hungry, and Christmas toys for millions of children, in addition to numerous other social service programs The Salvation Army provides year-round.

‘Watching the Cowboys game is such a tradition on Thanksgiving Day,” said Thomas Rhett. “It’s all about being together with family and friends, but this year is going to be a little different for us. I’m pumped that we get to pack up the whole family to go to Dallas for the halftime show…it’s going to be blast and helping do it for a good cause makes it even better.”

“Thomas Rhett is not only a chart-topping country artist, but also a musician whose commitment and passion for philanthropy makes him a great fit to join the Fight for Good and kickoff the Red Kettle Campaign,” said Charlotte Jones Anderson, executive vice president and chief brand officer for the Cowboys and former national advisory chairperson for The Salvation Army. “Every year, The Salvation Army makes a difference in the lives of millions of Americans. We want everyone to know that their donations truly make an impact.”

The Red Kettle Campaign, which begins on Thanksgiving Day and runs through Christmas Eve, is the largest and longest-running fundraiser of its kind. It raised $147.3 million during the 2016 campaign alone and has raised nearly $2.2 billion since the Cowboys Thanksgiving Day partnership began in 1997.

“We are thankful for our partnership with the Dallas Cowboys, whose organization has continually provided us with incredible awareness during our most critical fundraising season,” said Lt. Col. Ron Busroe, national community relations and development secretary for The Salvation Army. “We celebrate their ongoing support, and what is sure to be a memorable kickoff performance.”

As the first country artist to top the all-genre Billboard 200 Album’s chart this year, Thomas Rhett’s star has continued to rise since the release of his debut album “It Goes Like This.” Currently the Academy of Country Music’s Male Vocalist of the Year, his albums have also garnered GRAMMY, CMA, CMT, and iHeartRadio Music award nominations, including major wins for his love song “Die a Happy Man.” Thomas Rhett recently released his third album LIFE CHANGES and announced he will be bringing his signature swagger to his LIFE CHANGES TOUR 2018.

To watch Thomas Rhett reveal himself as the halftime performer, click here.

In addition to donating to the traditional bell ringers that will be stationed at retail locations throughout the country, supporters can join The Salvation Army’s Fight for Good by starting their own #FightforGood fundraiser on RedKettleReason.org.

Join the Fight for Good

Donations can also be made through the Army’s text-to-give program. By texting the word “KETTLES” to 51555, donors can send any amount to the Red Kettle Campaign.

From its humble beginnings as a Salvation Army captain’s start-up program in 1891 in San Francisco, the Red Kettle Campaign has grown into one of the most recognizable and important charitable campaigns in the United States. It provides toys for kids, coats for the homeless, food for the hungry, and countless social service programs year-round. As part of the campaign, more than 25,000 Salvation Army volunteers throughout the country ring bells and solicit donations to the red kettles.

Thomas Rhett recently released his third album LIFE CHANGES (The Valory Music Co.), the biggest, boldest-sounding record of his career, filled with a diverse batch of songs united by the “consistency of their craft” (Variety) as he stretches his sound to new limits. Highlighting his “detailed style of songwriting” (Rolling Stone), the new release debuted at No. One on the all-genre Billboard 200 chart, marking the first Country release to take the top spot in 2017. The “expertly assembled” (All Music) album is garnering early attention, earning his ninth career No. One with his fastest peaking single yet, the GOLD-certified “Unforgettable.” He recently received three CMA Awards including Male Vocalist of the Year along with Musical Event Of The Year and Music Video of the Year for the No. One GOLD-certified lead track “Craving You” and is currently nominated for an AMA Award for Favorite Country Male Artist. Thomas Rhett has earned major trophies from the Country Music Association, Academy of Country Music, Billboard Music Awards, CMT Music Awards and more while also drawing GRAMMY Award, American Music Award and iHeartRadio Music Award nominations, among others. In April, he will launch his LIFE CHANGES TOUR 2018. For more information and a full list of upcoming tour dates, visit www.ThomasRhett.com.

The Salvation Army, established in London in 1865, has been supporting those in need without discrimination for more than 135 years in the U.S. Nearly 25 million Americans receive assistance from The Salvation Army each year through a range of social services: food for the hungry, relief for disaster survivors, assistance for the disabled, outreach to the elderly and ill, clothing and shelter to the homeless, and opportunities for underprivileged children. For every dollar donated to The Salvation Army, 82 cents is used to support those services in 5,000 communities nationwide. The Salvation Army tracks the level of need across the country with the Human Needs Index (HumanNeedsIndex.org). For more information, go to SalvationArmyUSA.org or follow on Twitter @SalvationArmyUS.

In the area of community service, the mission of the Dallas Cowboys and Jones Family Foundation ’s mission is built upon on an overall philosophy of helping those who don’t have the strength, the resources, or the means to help themselves, with a primary focus on a partnership with The Salvation Army. With the Cowboys organization having enjoyed immense and unprecedented success, the Jones Family feels a very strong obligation to take the visibility, energy, and celebrity of one of the world’s most powerful sports franchises and channel those dynamic forces toward the bigger purpose of making a difference. Recognized as one of the world’s most generous families, the Joneses enlist the talents, skills, and resources of all the Cowboys players, coaches, cheerleaders, and every member of the organization to provide a unique and cutting- edge approach to community outreach. More information about the Dallas Cowboys and the Gene and Jerry Jones Family Foundation can be found on at www.dallascowboys.com.

24 hours after announcing her support of The Salvation Army’s 123rd Red Kettle Campaign with a performance at our Kick-Off show Thanksgiving Day, Selena Gomez went On-Air with Ryan Seacrest to promote her Online Red Kettle. 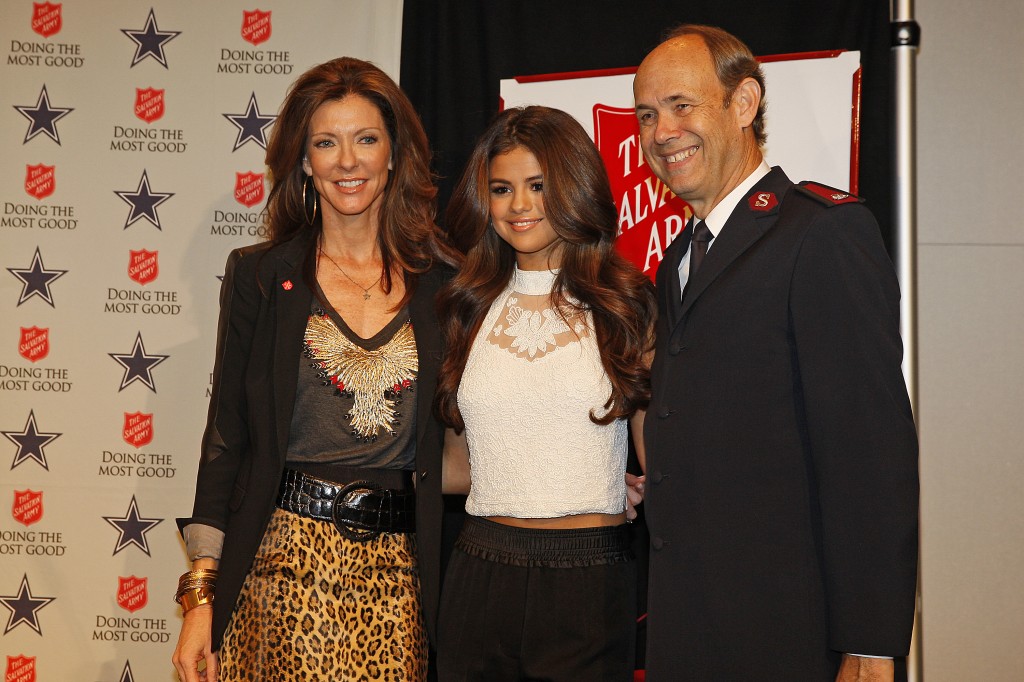 You can join Selena Gomez’s Red Kettle Team by visiting http://www.onlineredkettle.org/selenagomez. In doing so, you could win the chance to virtually connect with Selena on a Google Hangout later in the season.

The Salvation Army Red Kettles have been an American tradition since 1891, helping raise financial support for critical Salvation Army programs and services year round.  This campaign allows you to host your own Red Kettle – online.

Over the years, the Red Kettle Campaign has grown into one of the most recognizable and important charitable campaigns in the United States – providing toys for kids, coats for the homeless, food for the hungry and countless social service programs year-round. You become a vital part of our Christmas efforts when you help those in need by hosting an Online Red Kettle and filling it with donations from family, friends and colleagues.
Click here to get started today.

Under the operation of The Salvation Army, the facility is intended to provide a safe haven for children to improve their skills to live life to the best of their abilities. YET centers offer programs to enhance a child’s physical, social, psychological and spiritual well-being.
Since Super Bowl XXXVII in 1993, the National Football League has donated $1 million to establish Youth Education Centers in every city a Super Bowl is hosted. Arlington held the big game in 2011 and is recognized with the gift of this new center. Funds were also contributed to this project by The Gene and Jerry Jones Family Arlington Youth Foundation and the Super Bowl XLV Host Committee.

Appropriately, there was even a ceremonial touchdown run.

For information about becoming a member, volunteer, or to donate, please visit: http://www.salvationarmyyet.org/p/About/205