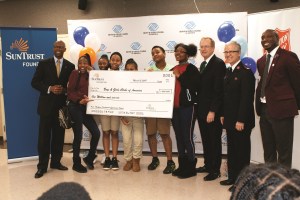 SunTrust Banks doing their part to prepare youth for workplace

The Boys & Girls Clubs of America has partnered with the SunTrust Foundation on a nationwide Workforce Development Effectiveness Project, with a $1 million donation to launch the program announced at the Bellwood club of The Salvation Army in Atlanta, Georgia.

The gift, by the charitable giving arm of SunTrust Banks, goes toward a program to give youth the knowledge, skills and experience to be better prepared for the workplace. A ceremonial check was presented March 15 before a crowd of cheering young people.

“We’re here to help you get a job,” said Jim Clark, president and CEO of the nationwide Boys & Girls Club. “We’re announcing today a big investment to help you do just that – prepare you to get a job and the skills you need, the things you need to know and have to do to be super successful.”

“You guys are our future,” Little said. “You’re going to work in the 21st century, and you’ll need 21st-century skills.”

The program acknowledges the talent shortage faced by employers worldwide, according to the Boys & Girls Clubs. Many U.S. employers say their greatest needs are people with “soft skills,” such as communications, customer service, creativity, collaboration and critical thinking.