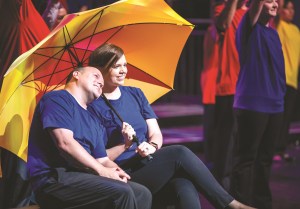 On the evening of Saturday, June 1, the Messengers of Compassion Session joined forces with musicians and artists from across the Southern Territory to present a spectacular and worshipful production. The program, titled “Mighty To Save,” was driven by the premise of General William Booth’s “A Vision of the Lost.” It began with a dramatic presentation of Scripture, centering on Isaiah 49. At its conclusion, the simple declaration that “Our God is mighty to save” provided the backdrop for the remainder of a memorable evening.

Interspersed with artistic triumphs were stirring testimonies, with Cadet Sarah Nance, Cadet Trevon King and Cadets Michael and Amanda Cain sharing their stories of triumph and redemption. That outward expression of inward change added poignant context to the proceedings, while allowing for reflection from those in attendance.

“I have chosen to forgive and seek forgiveness because he forgave,” said Cadet Nance. “I know now that I am loved immeasurably more than I could ever imagine by my heavenly father. He sees me as worthy. He calls me daughter. He is my light and my salvation. Whom shall I fear? The Lord is the stronghold of my life. Of whom shall I be afraid? And by his grace, I stand before you today redeemed, restored and a Messenger of Compassion.”

In furthering the worshipful attitude of the evening, Ronnie Murchison, accompanied by transMission, contributed a set of praise songs. A central selection, “I Will Fight,” encouraged attendees to “come and join God’s army now,” insisting that “there is room for all who have laid down their lives and picked up their cross.”

The Messengers of Compassion also took part in musical performances in their own right, with soloist Cadet Rachel Pruitt leading a jazzy presentation of “We are Soldiers in the Army.” In addition, youth from the Evangeline Booth College executed a musical presentation of Kirk Franklin’s “Lean On Me,” illustrating the talent and Christian spirit that moves beyond the cadets themselves.

In addition to Cadet-driven worship and participation, the Southern Territorial Band and TAM dance ensemble joined forces to deploy a professional-quality artistic experience. Nick Simmons-Smith, territorial music secretary, presented a new musical selection based on General Booth’s “A Vision of the Lost,” with expressive movement and fantastic visuals.

Prior to the start of the selection, Cadet King set the table with a simple challenge.

“Sometimes in our efforts to do the most good, it can get easy to turn our eyes away from the mission,” he said. “But I believe that, where we have lost focus, we can turn back – we must turn back – and answer the call of our Lord and Savior to rescue the perishing.”

The musical feature included the tunes of “Rescue the Perishing,” later sung by Cadet Jae Sung Park in unforgettable fashion, and “Love Lifted Me,” with references to a vision of a dark and stormy ocean clashing with lightning and thunder. In the midst, the theme of one emerging from the stormy water with an eye toward going back to save others was clear.

“Rescue the perishing,” the song says. “Care for dying. Snatch them in pity from sin and the grave. Weep o’er the erring one. Lift up the fallen. Tell them of Jesus, the mighty to save.”

Cadet Roger Galabeas offered an inspiring vocal rendition of “Rescue,” a contemporary selection from recording artist Lauren Daigle. He was supported by the Southern Territorial Band, TAM Dance Ensemble and transMission in a fitting and powerful message and charge to rescue others in the vision of Jesus.

On the heels of the vivid imagery created by the combination of music and art, Commissioner Willis Howell, territorial commander, provided a call to action; to search for those who are in need and do one’s best to save them.

The cadets’ vocal benediction titled “The Blessing,” provided a portrait of what they had experienced. While the night featured high-level performance and, in turn, emotional resonance, the overarching charge and message were clear.

“My friends, each of you who carry the name of Christ, and all the more so if you call yourself a Salvationist, this is our call,” said Commissioner Howell. “What will you do?”

A Network For Good in Robeson County

EMBRACE: A covenantal commitment to a journey to end racism

The Salvation Army of Jackson, Mississippi celebrates a good day for doing good

Basketball as a ministry: Salvation Army in Pensacola sends basketball team to tournament

Paying tribute to Divisional Man of the Year recipients The Salvation Army mobilizes to offer meals, comfort in Oklahoma, Arkansas ...
%d bloggers like this:
Scroll to top