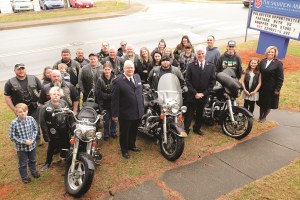 Sons of the Savior: Don‘t call these Salvationists a motorcycle ’gang‘; they’re a ministry

Normally, when you hear or see a motorcycle gang, the image of fierce, mean renegade outlaws could be what you conjure up. But not the “Sons of the Savior” Motorcycle Ministry (SSMM), some of whose members are also soldiers of the Hendersonville, North Carolina, Corps.

That’s because, first, they don’t consider themselves “a gang” (theirs is a ministry); and second, these men and women are all born-again Christians. When they are not taking on a project to benefit the community or their corps, they are roaring down the open road — and even then, their witness is most evident by the gospel patches adorning their leather jackets.

The founding four members — Roy Snelson, Gary Benfield, Robert House and Scott Justus — were brainstorming ways to give life to the “aging” Men’s Fellowship Club at the Hendersonville Corps. Some younger members wanted to do more, and as they talked, they realized they all shared a love of motorcycles.

“Originally, we wanted to call ourselves ‘Sons of the Son,’ but another group had rights to that name, so we tried a few others on,” said founding president Snelson. “We really wanted to keep the ‘SOS’ or ‘SOTS’ acronym, and Gary suggested ‘Sons of the Savior.’ The name stuck.”

The “Sons” are male and female, and they spend about as much time doing good in the corps and in the community as they do on their hogs. Membership quickly grew; and you don’t necessarily have to own a motorcycle to join in the fun. The oldest member is 55; the youngest, 21.

“At least one member of the ‘Sons’ is on the road every day,” said Benfield, who rides a 2015 Harley Davidson Road King. “We try to group up on Saturdays and after church on Sundays—we ride as much and as often as we can.”

“This started out as a fellowship, but it quickly morphed into a ministry,” said Justus, who rides a 2000 Road King (all-chrome, with painted orange flames). “This is a brotherhood, and without a doubt it is the best. We love each other and we love serving the community.”

House, who sports a Kawasaki Vaquero 1700, said, “It is important for me to get with a group of guys who love the Lord and who I can trust. We do a lot of good around town, but it’s really to show everyone what Christianity is all about.”

One young couple caught the fever, although Shawn Briggs is a multigenerational biker.

“My mother was a biker (and a tattoo-artist!) and she rode with her dad. She passed her love of riding on to me,” Briggs said.

His wife, Christy, said she absolutely loves sitting on the back of Shawn’s 2015 Kawasaki Vulcan.

Some of the things they do in the name of Christ include helping with The Salvation Army Angel Tree program; making toy runs; stuffing school backpacks; manning hydration and prayer tents at Christian outdoor events; buying groceries for needy families; paying people’s power bills; and witnessing.

That last item is especially important to the Sons.

“When we ride to a location, we never take the same way back home,” Snelson admitted. “That’s because people are curious when they see us riding, and we answer their many questions. Whether we’re eating an ice cream cone or drinking a cola, we tell them about our love for the Lord and what he can do in their lives as well. We offer to pray with them.”

Straddling his 1999 Harley Davidson Fat Boy, Snelson said, “Look past our tattoos, bandanas, and leather jackets and see that we are a group of brothers who love Jesus.”

This is by no means the only Salvation Army motorcycle club, by any name — there’s at least one in each of the USA Eastern, Central and Western territories. Most clubs have their own patches and are incorporated.

However, offshoot chapters of “Sons of the Savior” are springing up in Austin, Texas; Topeka, Kansas; Fayetteville, North Carolina; Phoenix, Arizona; Hilo, Hawaii; and an innovating branch at the Charlotte, North Carolina, Adult Rehabilitation Center.

“In fact,” Snelson said, “our clubs are planning to meet near Camp Walter Johnson (North & South Carolina Division) and roar into men’s camp in May. Wouldn’t that be a fine sight (and sound) to see some 30 Christian men on their bikes rumbling into camp?”

For more information, please visit www.sonsofthesaviormm.com and on Facebook, Sons Of The Savior M/M. 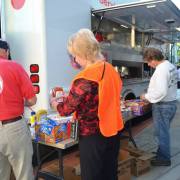 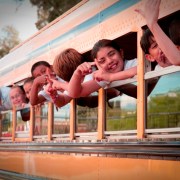 The Salvation Army of Georgia Responds to GEMA Request