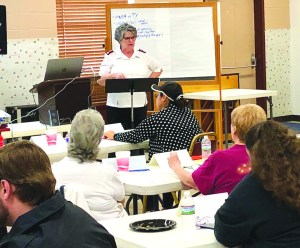 A woman enrolled in the Pathway of Hope has lost her children to the state and is working on her life skills to get them back, but visitation is far away and she doesn’t have a car. She knows you’re a Salvation Army soldier, and she asks if you can give her a ride. What would you do?

“The first answer would be, don’t do that; there are Safe From Harm issues,” said Major April Taylor, corps officer in Waco, Texas. “A corps officer would speak to this person and see if we can get her the services she needs.”

That’s a lesson one might encounter in “Soldiers Along the Pathway of Hope,” a complementary training program developed by the Texas Division.

Pathway is unique in that it intentionally integrates pastoral care and social services for families that request the support. Soldiers – the frontline troops of a corps – can play an important role.

“We want the soldiery to be involved,” said Taryn Piatkowski, Pathway of Hope divisional specialist for Texas. Just as case workers help people meet physical needs – for food, shelter, budgeting, job finding and other necessities – “The Salvation Army has the internal resources, through the corps, to meet spiritual and emotional needs.”

“The pushback we got from case workers was that while it’s great to have more volunteers, they’d need to be trained in the ethics, confidentiality and boundaries of working with vulnerable families,” Piatkowski said.

There’s the desire to “put the mission and ministry” of The Salvation Army – the WHY of sharing the gospel message – “back in the hands of the soldiers,” Major Juliana said. And, the need among Pathway clients “for a connection, an anchor,” to a caring community.

“We understand in the Army that corps officers are the passing parade – we’re the ones who leave and change appointments from time to time – but our soldiers are the ones who stick around,” Major Juliana said. “Families have a tendency to connect with families, and individuals, with individuals. We said, why don’t we connect our Pathway of Hope families with families in the congregation?”

The Texas Division ran a pilot session with 15 soldiers from the Waco Corps last October. A second session was held in February at local officers council at Camp Hoblitzelle, Texas. The training was so well received, Texas was requested to present it as an offering in April at The Salvation Army National Social Services Conference in Kansas City, Missouri.

To guide Pathway clients from crisis to sufficiency, Major Taylor said, “the first place to start is the corps. That’s an already created community of supportive believers who can come around to an individual, at their choice, to support them and help them through the struggles they may have.”

Training helps soldiers understand a Pathway client’s life challenges, the things out of the client’s control, and the parameters for coming alongside – “what they should and should not be doing to assist a person going through this reorientation back to self-sufficient living,” Major Taylor said.

Or, she added, “how to be involved without being too involved.”

It’s too easy, when trying to help, to fall into the trap of co-dependency. For example, a person may come to the corps in need of milk for their family. Your initial response might be to offer to buy them a gallon of milk. That’s well and good; but the next time, the client may come saying they’re out of diapers and baby food. Eventually, they may start asking for money.

What to do instead? “Let them have a conversation with the corps officer,” Major Taylor said. “It could be a simple solution, perhaps a referral. An officer can judge if there’s a dependency.”

Working collaboratively with the social services team, a corps can provide a strong team of support to help a family achieve their goals.

Tyler Stevenson, a Waco Corps soldier who attended the training with his wife Laura, said it helped them see “how we as a church can help with this Pathway of Hope thing we’re going to be doing in the community, and what we can do as a congregation to help the corps officers.”

“Now that we’ve been through this training, I’m able to give people the information they need, where they need to go, who they can talk to, and the resources readily available to help them” – from rental assistance to housing to the food pantry, Stevenson said.

In the example of the Pathway mother without a car – it really did happen, in Waco – corps members invited her to a young adult Bible study. Through this outreach, Major Taylor said, “she was finding people she could talk to about her situation and about choices – helping her make better choices in a better community group of peers than she had previously.”

“Positive peer groups and positive people at The Salvation Army are lifting her up, offering her prayer and support, and helping her find a community where she’s accepted for who she is.”

Salvation Army truck driver honored to do his part

USA South welcomes Chief of Staff Yoga classes are flying high at the Kroc Center of Memphis
%d bloggers like this:
Scroll to top