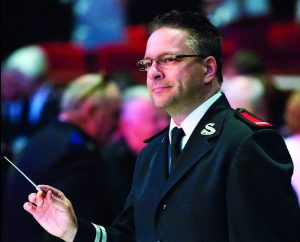 The issue of mental health awareness has been growing steadily over recent years as more and more people – some in the spotlight of Hollywood or in professional sport – have opened up about the causes and effects of depression, anxiety, loneliness and suicidal thoughts.

I myself have felt a greater awareness of mental health issues with the various musicians and artists that I work with throughout the year. It appears that the results of increased social media interaction have enabled people to “tell their story” but also caused them greater anxiety and introspection as they put themselves in the vulnerable position of receiving comments (not always positive, sometimes abusive) on social media platforms like Facebook or Twitter. Salvationists are, of course, not immune to these issues.

It was with this growing awareness of how many people were affected by mental health issues that I wrote a new piece of music for the Southern Territorial Band. “Songs of Hope” was intended to give comfort to those that walk through particularly dark and difficult days. The composition will be performed in Saturday evening’s program on Commissioning Weekend.

As Christians, we are occasionally guilty of simply saying “Jesus is the answer!” in response to someone’s problems. That response is true, but it does not fully empathize with the fact that a person may be fighting a desperate battle that may move them to consider ending their own life – because obstacles seem insurmountable and life itself appears completely overwhelming.

I have met extremely talented, bright, energetic young people who appear to have “it all together” contemplate suicide because of problems at school and home. It’s hard to comprehend this growing phenomenon – but it is real.

The songs featured in this major work include “On Christ the Solid Rock I Stand,” “Don’t Despair,” “Cornerstone,” and Joy Webb’s “There Will Be God”:

Man walks alone amidst uncertainty,
Only one thing can still make him strong;
In the pain, in the doubt, in the loneliness,
In the struggle of right against wrong;
Somewhere amidst the confusion,
There will be hope, there will be love,
There will be God.

On the two occasions that the band has performed this piece I have spoken with many people who have been affected by mental health issues, and they have been glad that this piece has brought light to this difficult subject.

I have been affected by suicide in my own family, and even after nearly 30 years I still cannot fully understand how and why certain things happen. We don’t tend to talk about these things very often, which is why I hope this positive – not morose – piece of music will give people renewed hope as they battle their own struggles, and comfort that they are not alone.

“Songs of Hope” starts and finishes with the inspirational words of SASB #550:

There is a hope that lifts my weary head,
A consolation strong against despair,
That when the world has plunged me in its deepest
pit, I find the Savior there!
Through present sufferings, future’s fear,
He whispers ‘courage’ in my ear.
For I am safe in everlasting arms,
And they will lead me home.

Nicholas Simmons-Smith is the territorial music secretary and bandmaster of the Southern Territorial Band.

Bringing Smiles Back: One Little Girl at a Time

Are you ready to celebrate National Donut Day?

Known for innovating, some Kroc Centers are renovating The Salvation Army providing services to refugees in Texas
%d bloggers like this:
Scroll to top