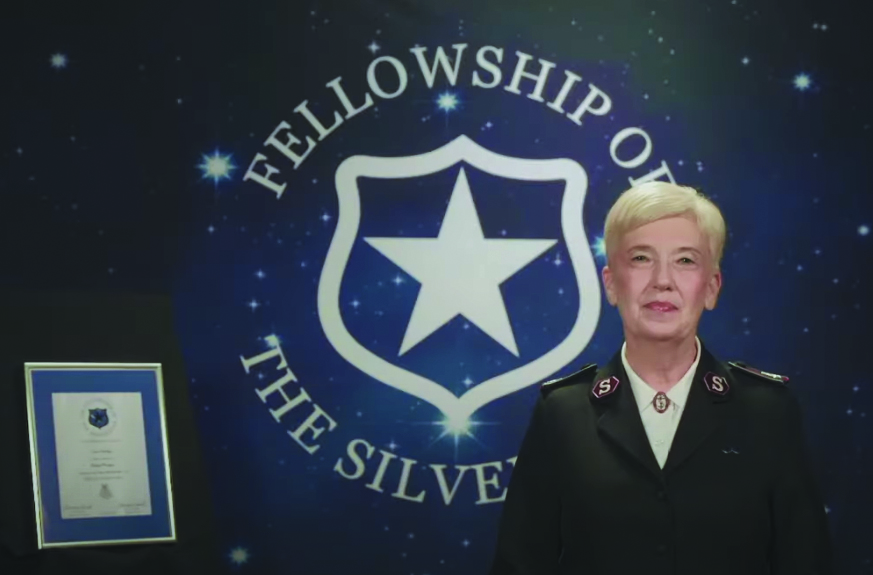 In normal times, the Order of the Silver Star Luncheon is a gala event held on Friday afternoon of Commissioning Weekend, honoring the parents of cadets who are about to be commissioned as Salvation Army officers. Largely because of the COVID-19 pandemic, however, 2020 is anything but normal times, and the Silver Star celebration by necessity took on a different look this year.

The constraints of social distancing made the usual luncheon an impracticality, so the celebration of a critical ingredient in the formation of a Salvation Army officer was carried out in video form and presented online following the virtual commissioning of the Messengers of the Kingdom Saturday, June 13.

Commissioner Barbara Howell, territorial president of women’s ministries, welcomed viewers and expressed her regret that parents of the Messengers of the Kingdom could not be physically present for the celebration honoring their efforts as parents and positive influences on their children. Lt. Colonel Fiona Hofer followed with a narrative of the background of the Order of the Silver Star, then most of the remainder of the presentation featured the Messengers themselves.

Lieutenant Abby Milner was the representative speaker, and she thanked her parents for their love and unwavering support, which helped carry her through some years of personal trial and difficulty when she turned her back on God and became lost on a wayward path.

“Sometimes, people come into your life and you know right away that they were meant to be there,” she said. “To serve a purpose, teach you a lesson, cheer you on, or to help you figure out who you are meant to become. They are the ones who see more in you than you can see in yourself. They could be a family member, pastor, a professor, a friend, or even a complete stranger. For me, it is my parents, Majors Andy and Amy Kelly, who have faithfully served as officers of The Salvation Army for over 35 years.”

Lieutenant Milner was followed by her session mates, who expressed their gratitude their parents and those who had raised them and set them upon their path.

Grocery Shopping This Week? Throw a Few More Items in Your Cart for Families in Need

Messengers of Compassion called to action