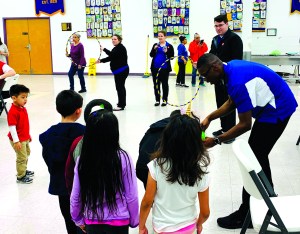 Second-year cadets take compassion to cities on the border

The Messengers of Compassion Session at the Evangeline Booth College has more than experienced the way God moves forward with his plan and his plan alone. Traditionally, the second-year cadets anxiously wait for their Spring Mission reveal during a special Sunday night fellowship meeting. Captain Marion Platt, through a mission-themed game of Jeopardy, revealed that the session would be going to Port Au Prince, Haiti. However, a few days later they would soon find out that God had a different plan for their session to serve the border communities of Laredo and McAllen, Texas.

With political unrest in Haiti and the humanitarian crisis in the Rio Grande Valley, it was extremely important to the session to come together and pray for both areas. After arriving in Texas, their hearts were heavy as they saw busloads of asylum seekers forming lines into the Holding Institute in Laredo and the Catholic Charities Respite Center in McAllen. More than 300 people, including children, enter these centers daily for rest, soup and a quick shower.

The Laredo, Texas brigade planned on doing an open air in the downtown square, but due to permit issues they instead asked to have the open air at the Holding Institute. The resounding of the brass band and the words of “Te Amo” filled the ears of those who enjoyed the open air. They spread joy by painting faces, making balloon animals and giving out free sno-cones. They formed relationships by playing different games with a rainbow-colored parachute and making crafts. One little girl made a timbrel at the craft station and quickly asked Cadet Amanda Cain to teach her the timbrel drill set to the music of “Te Amo.” Without pause, the cadet taught her the moves and together they played and practiced the drill, sharing an unforgettable moment.

“Even though many of us spoke different languages and couldn’t communicate well with each other, we were still able to enjoy each other’s fellowship and ability to love each other,” Cadet Cain said.

The McAllen brigade had an opportunity to spend an evening at Ejercito de Salvacion Hogar de Nino in Reynosa, Tamaulipas, Mexico. As each cadet entered this small children’s village, a piece of his or her heart was changed forever. The children were led into the chapel, where Cadet Sarah Nance would share a devotion about the pieces of their heart and the way that Jesus could make their hearts whole. They sang together, “Christo me ama” (Jesus Loves Me) and in this moment the cadets knew that the place was filled by the Holy Spirit.

Majors Abel and Ana Flores command the children’s village, and the light of their love for the children filled every room the cadets entered. Cadet Tre’von King said this of the visit, “Our visit to the children’s home in Reynosa broke me down. Most of the children have experienced a lot of pain and trauma, but you wouldn’t have been able to tell. They were content, full of energy, love and excitement. They were happy in spite of it all. There hasn’t been a day that I haven’t thought about the moments spent with them.”

Words could never describe the joy that the Messengers of Compassion felt while serving on Spring Mission. While the original plans were changed, nothing could ever surpass what God has in store for his people. Believers go on mission with the expectation that they are going to bring something that the people do not have whether that be food, hygiene products or creative programs, but what the people of these communities give back is so much more than we could imagine.

In the words of Major Roni Robbins, “This place. These people. We are forever changed.”

Cadets Amanda Cain and Sarah Nance are members of the Messengers of Compassion Session.

Salvation Army reaching out to help during troubled time