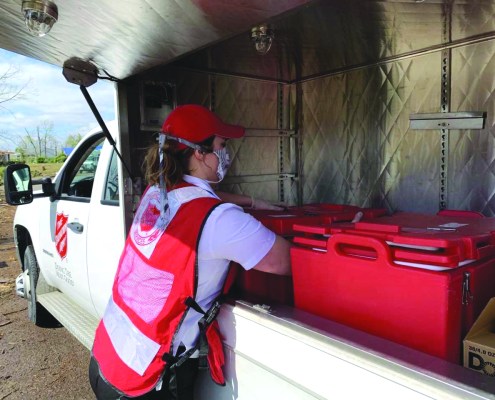 Second round of storms sweep across South

Just as had happened a week ago, the weekend concluded with an outbreak of storms that slammed the South, with most of the damage occurring in the Alabama-Louisiana-Mississippi Division. Fortunately, the outbreak on this occasion was less severe than that which swept through the South on Easter weekend.

The most severe damage occurred in Lamar and Marion counties in southeastern Mississippi, where a large tornado was reported and wind and hail caused some damage, resulting in more than 28,000 power outages. Need assessment was being done on Monday.

In Alabama, most of the storm’s effects were felt in the east central part of the state, where some 12,000 residents experienced power outages. In Coosa and Tallapoosa counties, The Salvation Army’s Alexander City Service Center was coordinating with state and county officials on service delivery. In nearby Chilton County, the Birmingham Area Command was working with state and county authorities on provision of services.

Louisiana experienced less damage. Some 6,000 residents were without utilities. The Natchitoches and Vernon parishes had some damage from high winds.

Meanwhile, the Kentucky-Tennessee Division continues relief services in the wake of the storms that struck the South Easter weekend. As of Saturday, The Salvation Army had served 9,800 meals along with 2,200 snacks and 3,400 beverages in Hamilton and Bradley counties.  Over 250 individuals have received personal prayer support. Four mobile feeding units were providing food and drinks, and six officers were offering emotional and spiritual care.

Belk Partners with The Salvation Army to Help in Hurricane Relief