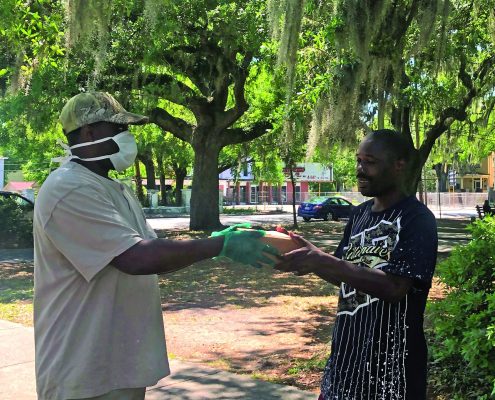 The city of Savannah, Georgia, asked members of Isle of Hope United Methodist Church and The Salvation Army to help distribute food, prepared by the Savannah Convention Center for homeless citizens. The Salvation Army canteen delivers breakfast to one location and lunch to another, Monday through Friday.

The Salvation Army in Savannah in recent weeks has been the recipient of four gifts totaling $45,000 to help it meet urgent human needs in the coastal Georgia city during the COVID-19 outbreak.

The Truist Charitable Fund – created through the recent merger of BB&T and SunTrust banks – awarded a $25,000 grant to assist The Salvation Army as it expands its shelter operations for homeless residents and feeding programs for those in need and deals with a surge in requests for food, clothing, rent and utility assistance.

“We are thrilled to have been awarded this grant from the Truist Charitable Fund,” said Major Paul Egan, Savannah Corps officer. “We are working tirelessly to help children, families and individuals who already have so little to manage throughout this very uncertain time.”

The Salvation Army’s shelter at the Savannah Center of Hope is now open 24 hours, serving three meals a day, and it has opened an additional shelter for women and children at its community center.

Separately, the International Paper Foundation awarded The Salvation Army two grants of $5,000 apiece from the company’s Savannah Mill and Port Wentworth Mill. The grants will go toward programming and to support The Salvation Army’s nightly meals, available to anyone in need at the Center of Hope.

“Funds received from International Paper will not only help us meet these immediate needs but will also help us make vital preparations for the next stage,” Major Egan said. “We are anticipating additional demands for our services in the aftermath of the pandemic.”

Finally, members of The Landings Landlovers Club presented a gift of $10,000 to the Savannah Corps in a brief outdoor ceremony April 20 at The Landings Plantation Club on Skidaway Island.

The Landlovers is a social club and philanthropic giving entity of The Landings residential community. Funds for the donation came from a recent flea market, its big annual fundraiser that was held, fortuitously, just before the COVID-19 outbreak. The Salvation Army assists with the event.

“They’ve been instrumental in helping us with our flea market over the years, and this year, they did a tremendous job,” said Rip Rubin, chairman of the Landlover’s flea market fundraiser committee. “We wanted to give back to them because we know they had to close their stores. … We thought this would be a perfect organization to be able to provide some money to.”

In remarks thanking the Landlovers, Major Egan said, “One-third of our budget comes from the sales at our stores. … Folks like The Landing Landlovers, The United Way, Gulfstream, International Paper – just to name a few – really go the extra mile to make sure The Salvation Army is still able to serve the neighbors of the people who live here in Savannah.”

The Walmart Foundation Donates $500,000 to The Salvation Army for Hurricane Laura Response

They Lost Everything But Their Compassion for Others

From sunrise to sunset, international Salvation Army responds to the General’s...
%d bloggers like this:
Scroll to top