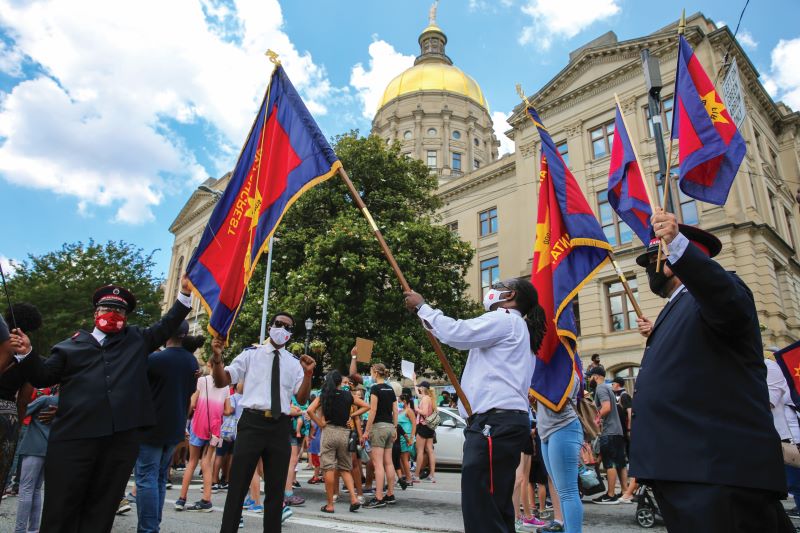 “The Salvation Army believes that God’s love is all-encompassing and it urges us to reject racism and discrimination. The Bible commands us to ‘be like-minded, be sympathetic, love one another, be compassionate and humble.’ We are committed to fighting racism wherever it exists and will speak up wherever we encounter it. As we pray for God’s will to be done on earth as in heaven, The Salvation Army will work toward a world where all people are loved.” – The Salvation Army Statement on the Death of George Floyd and the Ongoing Protests Across the United States, June 2, 2020.

Juneteenth, a day that commemorates the liberation of African-American slaves at the end of the Civil War, coincided this year with rallies around the country against hate and racism. And amid the signs and banners as thousands marched through downtown Atlanta, Georgia, the crimson-and-blue flags of one group stood out.

“People were asking us, what does ‘Blood and Fire’ mean?” said Captain Ken Argot, corps officer of The Salvation Army Atlanta Temple Corps.

“The flags were a wonderful witness,” Captain Argot said. “They’re a reminder that we’re a marching Army, going into battle, to places where darkness is. They gave us the ability to say, The Salvation Army is not just about providing social services; the theology behind it is we are freed by the blood of Christ, and the Holy Spirit infills us with his passion and fire to do his will.”

About three dozen Salvationists served at the “March on Atlanta” organized by the OneRace Movement on Junetenth – Friday, June 19 – offering bottled water and prayer at a rally and worship service at Centennial Olympic Park. They then joined participants as they peacefully marched about a mile to the Georgia Capitol, where the state legislature was considering a hate-crime bill.

After the turmoil of recent weeks touched off by the May 25 death of George Floyd, a black man in Minneapolis police custody, “we knew we needed to respond,” Captain Argot said. “To not respond would have been complicit with everything that’s going on. And historically, The Salvation Army has always been on the front line against social injustice.”

The Salvation Army worked with the Atlanta-based Coca Cola Bottling Company-UNITED to acquire more than 14,000 bottles of water at a discounted price.

Joelle Miller, special events coordinator for the Metro Atlanta Command, put together a logistics plan for the park that called for two canteens – from Red Shield Services and the Ray and Joan Kroc Corps Community Center – and four tents with tables and water bottle coolers and barrels, as well as personnel to staff them. Officers, soldiers and volunteers from local corps including Atlanta Temple, Atlanta International and Atlanta Peachcrest turned out for the event.

For all, it was an inspiring if exhausting day. Captain Argot arrived at the park to help set up at 6:45 a.m. and did not leave until 4:30 p.m.

“The wonderful thing about this was, it was a true bringing together of Christians from across Atlanta,” Captain Argot said. “It was so positive to see The Salvation Army connecting to other people of faith, taking a stand wherever there’s inequity. People were kneeling and praying, people were confessing to each other, people were listening to each other’s stories – it was really fabulous.”

“When we’re all stuck in our corps running programs, I think maybe we’re not aware of what’s happening in our community where we need to take a stand publicly,” he said. Juneteenth “was a great opportunity for us to reawaken The Salvation Army to a social movement to create change. It’s reawakening our commitment to social justice.”

For Panama City Man, The Salvation Army is There for the Second Time in His Life 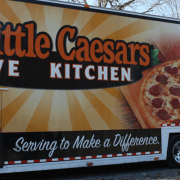 The Salvation Army meets human need in a variety of ways
%d bloggers like this:
Scroll to top