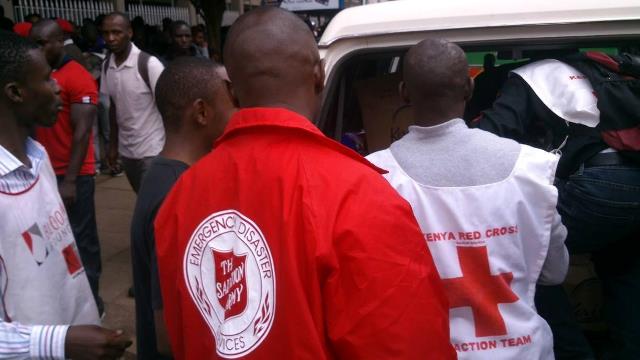 The following was contributed by The Salvation Army International Headquarters.
FOLLOWING the horrific armed attack on the Westgate shopping center in central Nairobi, Kenya, on Saturday 21 September, The Salvation Army has been supporting security personnel and blood donors. At least 69 people are known to have been killed in the incident, with a further 200 injured – some seriously.

Richard Bradbury, Projects Officer for The Salvation Army’s Kenya East Territory, lives close to the mall. His wife, Heidie, was passing the center as the siege began. Richard ensured that The Salvation Army’s major emergency plan was called into action, with four team leaders taking responsibility for organising teams, supplies, logistics and equipment.
As the severity of the situation unfolded, The Salvation Army was asked by colleagues in the Kenyan Red Cross to assist at a blood donation facility in the capital. Blood donors – including Salvationists – responding to the urgent need were provided with food and drink. An estimated 4,000 people were assisted in this way. As night fell on Saturday, blankets were provided for donors who were still waiting. Meanwhile, Salvationists in Nairobi began a prayer vigil, praying for those who had been bereaved and injured as well as for those still being held hostage in the continuing siege.

On Sunday, The Salvation Army’s focus turned to the Kenyan defense forces incident response base, a cordoned-off area where up to 500 soldiers, armed police and other emergency workers are coordinating their response. Further food and refreshments have been volunteered by members of The Salvation Army in Nairobi, with dedicated teams offering pastoral support.

With the situation still unresolved on Monday, Richard expects the Salvation Army response to continue for some time. ‘Whatever happens,’ he says, ‘we’re going to be here 24 hours a day for the foreseeable future – at least the next week or so.
‘Its obviously a tragedy – they just don’t know what they’re going to find in there. They’re expecting the death toll to rise, but so many people escaped as well. We have a heavy heart for the number of those who were killed, and the number of children who were there – that was significant.’

Nairobi is currently hosting COAL – The Salvation Army’s Conference of African Leaders – which is attended by leaders of every African territory, command and region, and International Headquarters representatives.

A peculiar way of music

The Salvation Army providing services to refugees in Texas
0 replies

A Refuge of Love, Hope, and Change – All Thanks to You