Leflore County, MS – A C-130 military transport plane carrying 16 Marines and crew crashed Monday afternoon in Leflore county, Mississippi. The United States Marine Corps has confirmed all on board died in the crash.

With the site covering a large area, many emergency personnel were brought in to provide security and to conduct an investigation into what happened. The Greenwood, Mississippi Corps was asked to serve 200 meals at lunch Tuesday.

“With federal, state, and local officials at this crash site, many for hours without a break, we knew it was important for The Salvation Army to be here serving and offering support for those men and women who keep us safe,” said Lieutenant Jamaal Ellis.

Lieutenant Ellis says his team served food, snacks, drinks and simply provided the emergency workers with someone to talk to. He says they were grateful for the support on a hot summer day.

“The people are coming in from the site exhausted from the heat, many of them working off minimal sleep, but they were truly grateful for the nourishment,” said Lieutenant Ellis.

The Greenwood Corps team consisted of volunteers, a board member, and a Salvation Army soldier, plus the Lieutenants Ellis. Their team will be back to serve lunch on Wednesday. 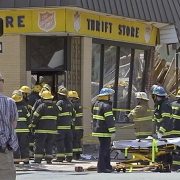 Partnership Feeding Personnel at MS Plane Crash Site Continuing into Next W...
%d bloggers like this:
Scroll to top