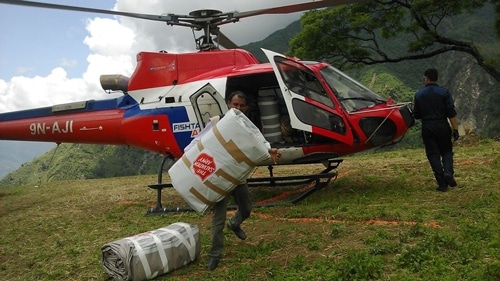 The Salvation Army continues to serve communities in and around Kathmandu following two earthquakes on April 25 and May 12 that killed 8,787 people and destroyed more than 500,000 homes.

Emergency response teams of The Salvation Army have been serving survivors in the urban and rural areas with operations revolving around camps for displaced people, including camp management roles and the provision of food, shelter, and water. Teams are also assisting many remote mountainous villages that are now isolated due to landslides from the earthquakes and subsequent rains from monsoons.

The Salvation Army has so far distributed 148 metric tons of food – including rice, oil, lentils and salt – to survivors, as many people have lost all of their food. This support will sustain families until the upcoming harvest. Additionally, hundreds of hygiene and sanitation items were distributed. 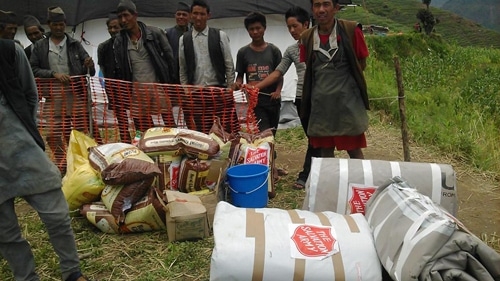 “This disaster response is especially complicated due to the remote and rugged nature of the terrain in Nepal, making the delivery of aid especially challenging,” said Betsy Baldwin, Disaster Technical Advisor for The Salvation Army World Service Office (SAWSO). “This has meant greater coordination and creativity has been required to reach remote communities and ensure that the limited amount of assistance does not duplicate the work of others.”

Funding from SAWSO is supporting the development of temporary housing and learning centers in the place of schools that were damaged in the earthquake. Approximately 3,000 tarps were distributed to community members needing covered living space and temporary learning spaces while schools are reconstructed.

In continued support of schooling in the area, The Salvation Army provided 850 educational stationery packs to children returning to temporary classrooms.

“Where the spotlight was once on the debris and the aftermath of this disaster, it has now shifted to The Salvation Army and its capacity to provide long-term relief efforts for this community in need,” said Lt. Colonel William Mockabee, Executive Director for SAWSO. “At SAWSO we seek opportunities to support the local Salvation Army – which has been serving the Nepal community since opening its doors in 2009 – and are privileged to fund this project that will develop temporary learning centers for children to get back to school.”

Electricity remains an issue for most mountain villages, particularly at night when steep ledges and terraced hillsides are now difficult to see and quite dangerous. The Salvation Army distributed 904 solar lamps to individuals and families in these areas to ensure their safety.

The Salvation Army’s valued relationship with Mission Aviation Fellowship (MAF) has allowed emergency response teams to deliver relief items such as this to rural mountain areas. Additional support from The UPS Foundation allowed SAWSO to coordinate the shipment and delivery of 1,000 tents and mosquito nets.

Monetary donations are the most critical need for survivors. The Salvation Army has set up a designated fund for relief efforts in Nepal. To give, visit salar.my/Nepal or call 1-800-SAL-ARMY (1-800-725-2769). Check donations to Salvation Army World Service Office (designate “Nepal Earthquake”) can be sent to:

In-kind donations are not being accepted.

The Salvation Army is committed to utilize philanthropic gifts in the manner donors desire. Occasionally, conditions in the field may alter relief activities. If this occurs, The Salvation Army will redirect funds to our International relief efforts in the area.