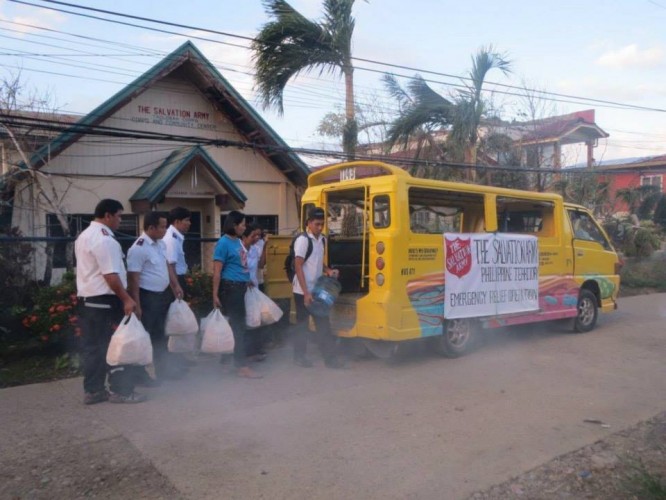 London, England (November 20, 2013) – The Salvation Army in The Philippines is increasing its collaboration with other agencies to provide help to the people affected by Typhoon Haiyan who need the most urgent assistance. Much of the 54 tons of food, water and medical supplies which have been gathered in Manila is still waiting to be transported to Tacloban for distribution across the Island of Leyte, but the first truckload of supplies – enough for 550 families – is expected today.

A ‘cluster coordination system’ has been set up to ensure that all agencies are working together, and The Salvation Army is working within the system, attending ‘cluster’ meetings that address logistics, health, food, shelter, non-food items (NFI) and protection.

The programme of support to people evacuating from Tacloban Airport is continuing to assist up to 1,000 people every day. At cluster meetings the potential for human trafficking was highlighted as an immediate concern, so a registration facility has been set up in a tent at the airport, with The Salvation Army given a tent next to this at which it will provide refreshments and sandwiches.

Thanks to arrangements made through a partnership with The Salvation Army USA, the Chief Executive Officer of the Christian Medical and Dental Association of the USA (CMDA), Dr David Stevens, arrives in Manila on Friday with a team of four colleagues. By start of next week they hope to join forces with Salvation Army medical staff on Leyte.

The emergency response team in Tacloban is currently identifying the areas for its first big distribution. Consideration is also being given to an additional food project for the areas outside of Tacloban that haven’t received support. With transport continuing to be a major issue, enquiries are being made in Cebu to purchase food and other items, along with a truck to transport the supplies to Leyte. A warehouse owned by the Church of Jesus Christ of Latter-day Saints will be used for storage – a vital element in the process.

For the people who remain on Leyte, shelter is a great concern. There is currently nowhere to obtain tarpaulins which can be used to waterproof damaged houses, so The Salvation Army is looking at ways to bring in roofing sheets that could provide a simple, longer-term solution.

Out of Darkness There is Light and You Are Our Light

Louisville honors a ‘COVID Hero’ at The Salvation Army

Walmart & Salvation Army To “Fill the Truck” with Toys for Children...
%d bloggers like this:
Scroll to top