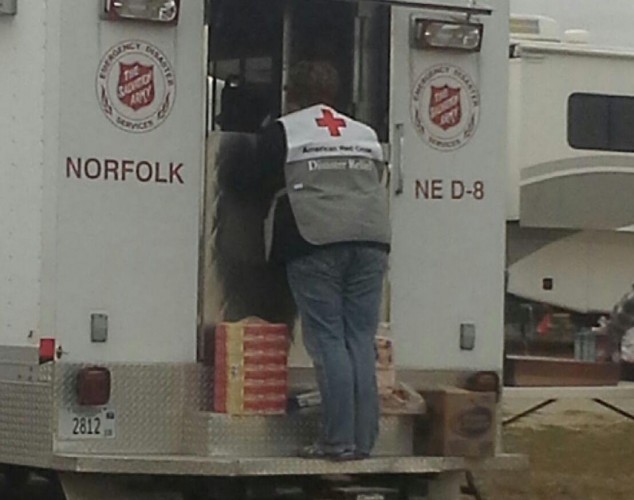 “We are here to help—if they need something to drink, to eat, or want to talk…”
(Sioux City, Iowa, October 5, 2013) — The Salvation Army in the Sioux City, Iowa area has mobilized two teams of trained disaster response workers to assist residents and first responders impacted by six confirmed tornados that hit various area communities on Friday evening, October 4th.

On Saturday morning, Salvation Army disaster response units were serving residents and aid workers in Macy and Wayne, Nebraska. Coffee, cold beverages, breakfast items and sandwiches were being distributed in the impacted communities.

The Salvation Army is prepared to meet not only immediate physical needs, but to provide emotional and trauma counseling to those impacted by the storms. Included in the response team is Rob Ouellette, who is employed as a Salvation Army program director in Sioux City and is an experienced crisis counselor. Mr. Ouellette stated, “I went to Wayne State (College, located in Wayne, Neb.), so it is important for me to be able to help this community that is such a key part of my life. We are here to help—if they need something to drink, to eat, or want to talk—we are here for the folks affected by these storms.”

The Salvation Army is coordinating its services with the local governments, the American Red Cross, and other providers, so that the residents of the many communities impacted by the storm receive needed services and support. How to Help:The best way to help is a monetary donation. Donations should be marked “tornado relief” and can be sent to PO Box 783, Sioux City, IA 51102.

At the present time, the Salvation Army is not accepting donations of clothes or other items for the survivors of these storms; however, these gifts are vitally important to your local Salvation Army. To give items locally, visit www.SATruck.com or call 1-800-SA-TRUCK.
For the latest EDS updates, visit http://disaster.salvationarmyusa.org/.

Emotional and Spiritual Care Personnel Offer Food for the Soul

With Tropical Depression Harvey Reforming in Gulf of Mexico, ALM Canteens on Standby

The Salvation Army of Georgia Responds to GEMA Request
0 replies

Help Keep a Child Warm this Winter, by Donating a Coat
Scroll to top