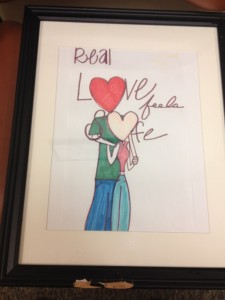 It’s Domestic Violence Awareness Month. If you know someone suffering violence, visit www.SalvationArmyUSA.org for information on Salvation Army shelters near you.

BREVARD COUNTY, FLA – Janice’s* scar is still visible.
The large oval red mark is where her boyfriend bit her more than a month ago. The bite left her arm bruised – blue, purple and now slightly red.
On her nightstand is a copy of Comfort for the Troubled Christian, by JC Brumfield. Janice says she reads it every night as she tucks herself into a bunk bed at The Salvation Army’s Domestic Violence shelter in Brevard county.
“A friend on the bus gave it to me,” the 43-year-old said. “And I’ve been reading it ever since.”

Women and families who find refuge at the shelter are given life skills, attend group counseling sessions and leave empowered.
“Many of the women who come to us blame themselves,” said Cynthia Mitchell, executive director of the program. “We try to help them get control back.”

For the first time in a long time, shelter residents are given choices and given their power back, Mitchell said. Last year the shelter helped nearly 200 Brevard county women. Often the shelter is over capacity, when that happens, Mitchell said, staff members bring in air mattresses – everyone has a bed to sleep on and everyone is safe.

For women like Janice, often the abuse is cyclical. Domestic violence isn’t about finances, despite what people think, Mitchell said.
“It’s about power and control,” she explained. “Women come in to our shelter and they have had their spirit broken, they’ve been terrorized. We just reinforce to them that there is nothing wrong with them and that they are safe.”

For 32-year-old Susan*, the shelter has been a place of safety. Recently she checked in to the shelter for the second time.
The first time, in October 2012, her husband beat her, sent her to a local hospital and while in the emergency room he choked her until police arrived.

“He would have killed me,” Susan said.

On Friday she walked into the shelter again.

“I’ve probably been in a violent relationship my whole life,” she said. “Since childhood, I’ve probably been hit more than 400 times. I just got so used to it.”
The good days – the days when Susan’s husband wasn’t beating her, choking her or threatening her – were the days he was strung out on drugs or hung-over.

“Those were the best days,” she said. “Those were the days I knew I wasn’t going to get beat.”
Susan said her breaking point came when she was staying at another domestic violence shelter and her husband found her.

“But this place,” she said looking around her room, “this place has saved my life.”

Student and survivor artwork line the shelter common room. Artwork with words like “Real Love Feels Safe,” “Be Proud of Yourself” and “No More Tears, The Pain is Over” help to inspire residents.

The shelter also has a partnership with the Sexual Assault Victim Services in Brevard county. When a woman is raped, she is taken the SAVS clinic, which is located at The Salvation Army. Samples are taken by an on call nurse. The clinic is set up like a gynecologist’s office – a bed, stirrups and a place for samples.

Unlike the emergency room where a woman would normally go, there’s a shower and a respite area. Mitchell said it’s a way to bring the survivor more comfort. If she has been abused, she is often admitted into the domestic violence shelter.

Shelter residents can stay at least 45 days, however length of stay varies depending on the needs of the residents and families.
Janice is on day 30.

She is looking for work. She is trying to find a place to live and putting the pieces back together of her shattered life.
But she said, “Sometimes, I wonder, what it would be like to go back to him,” her voice trembles as she gazes toward the JC Brumfield book. “I pray every day I can get a place and make it on my own without him.” *Not her real name.

Dulcinea Cuellar Kimrey is the Divisional Communications Director for The Salvation Army of Florida. She can be reached at [email protected]

The Salvation Army Canteen a Welcome Sight in Loris, SC

Study reveals Millennials are Charitable, Influential, & Eager to Connect Over a Cause

Crossroads Residents Learn the Value of ''Others''
0 replies