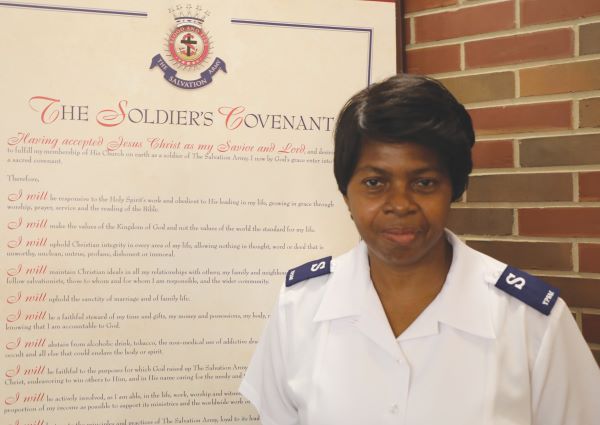 For 40 years, YPSM Jannie Cheatham has been a faithful soldier and volunteer of the Aiken, SC Corps—despite racism and family tragedy.

Racism, tragedy could not keep South Carolina soldier from keeping her covenant

Jannie Cheatham is keeping a promise made 40 years ago. She and her husband, Sammie, are faithful volunteers and soldiers of the Aiken, South Carolina, Corps. But keeping her promise to God and her community has never been easy – especially early on.

“I started as an employee in our thrift store in the early 1980s and eventually became manager,” Cheatham said. “Major and Mrs. Henry Russell were the corps officers then, and one day when they were in our thrift store the major said to me, ‘We haven’t seen you in our corps; do you attend church anywhere? Why don’t you come worship with us?’”

They had been attending a Baptist church but were not going as they should. They had a little girl by then, and with Major Russell’s invitation they decided to see what worship at The Salvation Army was like. Their daughter, Shaquita, loved being at the corps every Sunday and so the little family kept coming.

“After a few months, Sammie and I took soldiership classes and decided to take local officer positions in the corps – but not everyone in the congregation was excited to have us there,” she said.

One man was dead set against the couple taking on lay leadership. His excuse was that they may not stay for long. The real reason, however, was of a racist nature.

“People would say ugly things to us on Sundays, but that didn’t stop us – we still wanted to come here,” she said. “I’d say to them, ‘I’m not going anywhere – when I do leave, it’ll be when they roll me up this aisle on my way to the cemetery!’”
Despite that man’s continued harassment, Cheatham and the man’s wife became best friends. He became extremely sick and during some other tough times for that family, Cheatham stepped up and did whatever was needed for them.

In time, the man came to regret what he had been saying to Cheatham and her family. “You can’t judge a book by its cover,” she said. The Cheathams became respected and loved pillars of the corps.

Tragedy struck Cheatham’s family, as well. At age 6, Shaquita was killed by a drunk driver. “That happened on a Friday, and on Sunday, Sammie and I were here at church. People were shocked to see us and said, ‘What in the world are you doing here?’ But I told them that despite our grief, this is where the Lord wanted us.”

Cheatham is convinced that God used their daughter to lead them to an organization that would serve him and the community in ways they would not otherwise have found.

Today Sammie Cheatham is corps sergeant-major (the leading lay position in the congregation) and drives the Army bus to pick up people who have no other way to come to corps activities. Jannie is young people’s sergeant-major, working extensively with youth. They both teach Sunday school classes.

During the week they volunteer wherever needed. Other members of their extended family have become active in the Aiken Corps because of their faithfulness.

“This couple has been through a lot,” said Captain April Tiller, Aiken corps officer. “They came to the Army hurting and through the years experienced much more pain. But they’ve found answers in God’s Word and are vital workers in our corps.”

“God puts you where he wants you,” Cheatham said, “not where you want to be or feel comfortable being. No matter what color your skin is, or what tragedies come your way, God has your back!”

The Salvation Army of the Carolinas Closely Monitoring Hurricane Irma