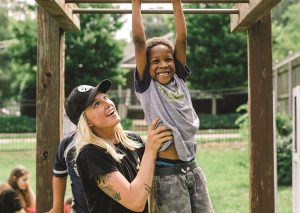 The members of Passion City Church were back this year to serve meals, plant shrubs and run a vacation Bible school – among other service projects – for Salvation Army installations in Atlanta, Georgia.

Now in its fourth year, the church’s #LOVEATLANTATOGETHER event goes for a week in June. About 4,500 people partnered with 110 community organizations to complete 330 projects – including 449 people for 28 projects at The Salvation Army. That’s up from about 50 partners and 100 projects when the outreach began.

“We started really with a dream and vision to reach the city, and hopefully multiple cities, to inspire people to a lifestyle of service and really start mobilizing them to unify around their communities,” said Dana Brennan, director of local engagement and community groups with the Atlanta-based Passion City.

In the beginning, Brennan said, some people already were volunteering, but many weren’t – not necessarily by fault of their own, “but maybe they didn’t know how to get connected to an organization. We knew if we could build a platform and a way for people to be more connected to the champions around our city … we could create some uncommon bonds.”

As a city church concerned about homelessness, addictions and other social ills, Passion City quickly thought of the Atlanta Metropolitan Area Command when it was lining up the first LOVE ATLANTA projects.

At the Marietta, Georgia, Corps, for example, Passion City volunteers this year helped run the summer camp – “playing with kids, teaching lessons and building relationships,” Brennan said. At the Red Shield Shelter Harbor Light Corps in downtown Atlanta, “we were a little more hands-on; we led and ran a vacation Bible school for the children there.”

Volunteers also did landscape maintenance and served dinner at the shelter; ran a VBS at Atlanta Temple Corps; and helped at The Salvation Army Bellwood Boys & Girls Club.