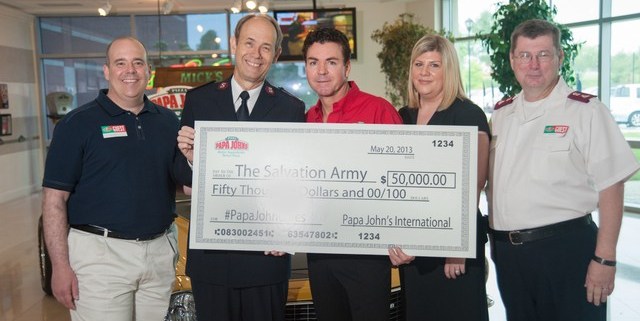 Town Hall meeting at Papa John’s, Monday, May 20, 2013 in The Hub on the corporate campus in Louisville, Ky. (Photo by Brian Bohannon)

Our friends at Papa John’s Pizza handed over a $50,000 check donation to The Salvation Army during a presentation at the company’s Louisville, KY headquarters on Monday, the result of both a highly successful social media campaign and the dedication of partners in “Doing the Most Good”.

The February social media campaign asked Facebook and Twitter users to ‘like’, ‘share’, and comment on their pages to raise awareness of America’s hunger problem, with every good word, re-tweet and thumbs up garnering a $1 donation for The Salvation Army’s feeding programs. Thanks to the power of social media, $50,000 was raised in one day by compassionate supporters and pizza lovers alike.

The Salvation Army serves approximately 60 million meals to Americans each year because of supporters like Papa John’s Pizza. We are beyond humbled by the company’s extreme generosity and commitment to feeding Americans in need.

Please help us thank Papa John’s Pizza and Papa John himself on Facebook or on Twitter using #PapaJohnCares.

From Sunrise to Sunset, from Samoa to Hawaii, the International Salvation Army Responds to the Generalâ€™s Call to Prayer