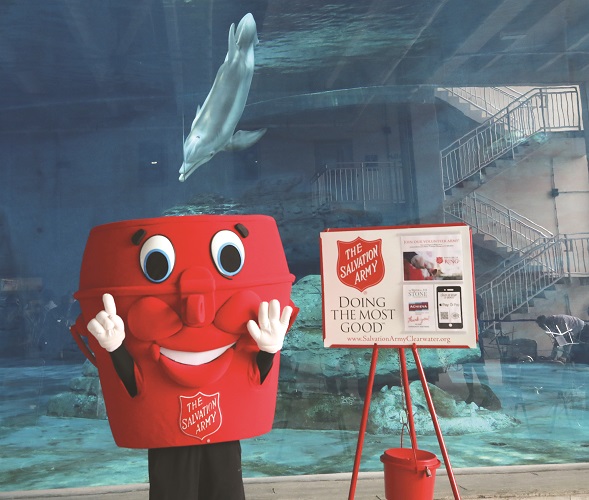 The Christmas Kettle Kickoff for Clearwater and Upper Pinellas County, Florida, took place in the newly renovated Ruth and J.O. Stone Dolphin Complex at the Clearwater Marine Aquarium, under the watchful eyes of Winter the Dolphin, the star of the movie Dolphin Tale. It was announced that the Ruth and J.O. Stone Foundation had committed to match dollar-for-dollar all funds raised in the Christmas Kettles in Upper Pinellas County this season, up to $250,000.

This is the largest Kettle Match in the history of the Clearwater and Upper Pinellas Command, and as the corps officer, Major Ted Morris noted, perhaps one of the largest Kettle matches in the country.  During his remarks, Mayor Frank Hibbard, a former advisory board member, spoke of the proclamation he presented to The Salvation Army in recognition of its mission to “Rescue Christmas” for so many during these difficult days.

The director of development for The Salvation Army, Teresa Hibbard, spoke of the similarities between the Clearwater Marine Aquarium and The Salvation Army, in that they both have “Hope,” (referring to Hope the Dolphin), who was rescued along with Winter. She also stated that the mission of the aquarium is to “rescue, rehabilitate and release” marine life, and similar, to the Army’s mission of rescuing those whose lives are in crisis, providing them with the proper resources to move out of their situation and then to release them to live a fulfilled life.

Following the first donation of $20,000 provided by Achieva Credit Union, on cue, Winter the Dolphin swam to the kettle as a symbol of the commencement of the Christmas Kettle season!