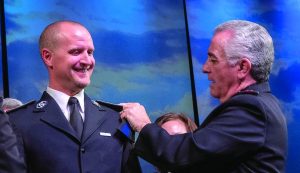 It was old meets new as the 2019 Southern Territorial Bible Conference marked its 50th appearance at Lake Junaluska, North Carolina, with a study of the Book of Ezekiel and the theme “New Hope and New Hearts.”

The Sunday night meeting featured The Jesus Theater, a creative arts presentation of the gospel from creation to redemption. Utilizing simple props, such as dozens of colorful kites, four wooden boxes and black garbage bags, the cast of young adults from five divisions gave a moving overview of God’s intention for man’s soul to soar in sweet communion with him. The altar was lined by scores of men and women seeking this new hope. It would not be the last time the Mercy Seat was so crowned this week.

The chief secretary, Colonel Bukiewicz, preached in Monday morning’s first session. Drawing from Hebrews chapter 9, the chief laid the foundation for the rest of the teachers with “Hope for the Heart.”

“It’s all about transformation that only Christ can give,” he said. “A change of our heart-heart perspective is our desperate need. Only the blood of Christ has power tocleanse, forgive, restore and renew. That’s what this week is all about. His blood makes my new heart possible!”

Tuesday evening was Soldiers’ Night, led by newly-installed Territorial Sergeant-Major Jeremy Rowland. Rowland’s installation, along with that of Terri Neville as A/TSM, made it possible to acknowledge the four years of service of TSM John Reeves.

“The word palingenesia means ‘genesis again,’” Carter said. “It is renewal. It is restoration to what God intends for us. It is a recapturing of that early joy we once felt; or a double portion of God’s power, like Elisha!”

Quoting William Booth, Carter said, “The greatness of a man’s power is in the measure of his surrender.” He also warned against the danger of a “comfortable snuggery,” as cautioned by Catherine Booth.

“You can ask God for palingenesis in your life – a double portion – a genesis again that can happen tonight—right now!” Carter urged.

Youth Night (Friday) is another highlight at SBC. Under the direction of Captains Ken and Jessie Chapman, in their 22nd year in that role, and their staff, this year’s musical was an incredible production of “Come Alive! A Vast Army!” (directed by Bethany Farrell).

The SBC youth had been studying Ezekiel 37, and their musical message was that God can bring a vast army to life, even to a valley of dry, dead bones.

Major Nelson’s sermon on Saturday morning came from Psalm 103 and Ezekiel 3. Calling every Christian a “watchman,” she stated that “hopelessness invokes fear” and that “the Church must never be second-inline in offering hope to the world!”

“God is sparing nothing in letting us know that we can rely on his power and blessing. He can do it again – and do it again in us!” Major Nelson said.

The climax came in Saturday night’s holiness meeting, led by Commissioner Barbara Howell. The congregation’s singing of “Holy, Holy, Holy” set the tone for Commissioner Willis Howell’s sermon, “The Heart of the Problem.”

“The heart of the problem is the problem of the heart,” the territorial commander summarized. Whether in our physical heart or spiritual heart, we tend to self-diagnose, and that’s usually a misdiagnosis.

“Spiritually speaking,” he continued, “it always comes down to a ‘heart issue.’ You may say, I may be strong-willed … I have an anger problem … I tend to be jealous and envious. But you are misdiagnosing the problem – it’s a heart issue! Yours is a heart that needs to be sanctified!” Commissioner Howell said.

Using a Southern colloquialism, he said, “Whatever’s down in the well is gonna come up in the bucket!”

God tells us to be holy because he is holy. “He can make us new. This is not what God wants from us; but for us!”

Where pandemic isolates, The Salvation Army steps in

Partners step up to assist with feeding programs