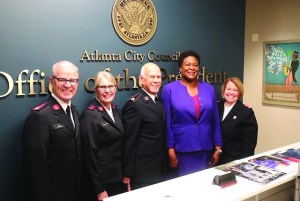 National Commander gets a look at Southern operations in Atlanta

Patrick O’Neal served in the U.S. Navy 10 years as an aviation electronics technician, but after leaving the military, his life began a slow decline. Outwardly self-reliant, working in manufacturing and most recently as an Uber driver in Atlanta, he abused alcohol to mask symptoms of post-traumatic stress disorder (PTSD), depression, anxiety and thoughts of suicide.

When O’Neal sought help from the VA hospital in Atlanta, a peer specialist got him to Red Shield Services of The Salvation Army Atlanta Metropolitan Area Command. Red Shield offers emergency and transitional housing with 320 beds for men, women and families; a Harbor Light substance abuse program; assistance to veterans, and other social services.

“Harbor Light is amazing; it’s done a lot for me,” said O’Neal, now living sober after 90 days in the program. Of all the people O’Neal’s shared his testimony with, he’s had a one-on-one meeting with Commissioner David Hudson.

The national commander of The Salvation Army was in Atlanta on Sept. 16 to present an award to its City Council, see Army operations, and speak with consumers like O’Neal. Commissioner Hudson also visited Chicago and Los Angeles to talk about poverty relief efforts and raise awareness of why communities should always consider The Salvation Army a partner in the work.

O’Neal said, “I grew up in a religious home, but I kind of fell away. Doing Bible studies here helped me re-establish a relationship with God. … This program really opened my eyes to how you can have a much better life being sober and substance-free.”

The city in July released a federally mandated “point in time” homeless count that showed a 16 percent decline in the total number of chronically unsheltered homeless individuals, due largely to an increase in the creation of low-barrier shelters through the efforts of groups like Partners for HOME.

To recognize such achievements, Commissioner Hudson made a stop at the Atlanta City Council to present it with the Others Award, the Army’s highest commendation.

“The mission of The Salvation Army states we are to meet human need in his name without discrimination,” Commissioner Hudson told council members. He applauded them “for helping meet human need by supporting programs aimed at creating a united Atlanta, a diverse inclusive city that affords Atlanta residents – all Atlanta residents – with much-needed resources and opportunities.”

“I love The Salvation Army,” she said. “They’ve done such great things in our community. … In 2009, when the flood came through, it was The Salvation Army who for at least two weeks straight, each and every day, provided hot meals to those who were flooded out of their homes.”

To Battle We Go: Every Salvationist must be a marksman