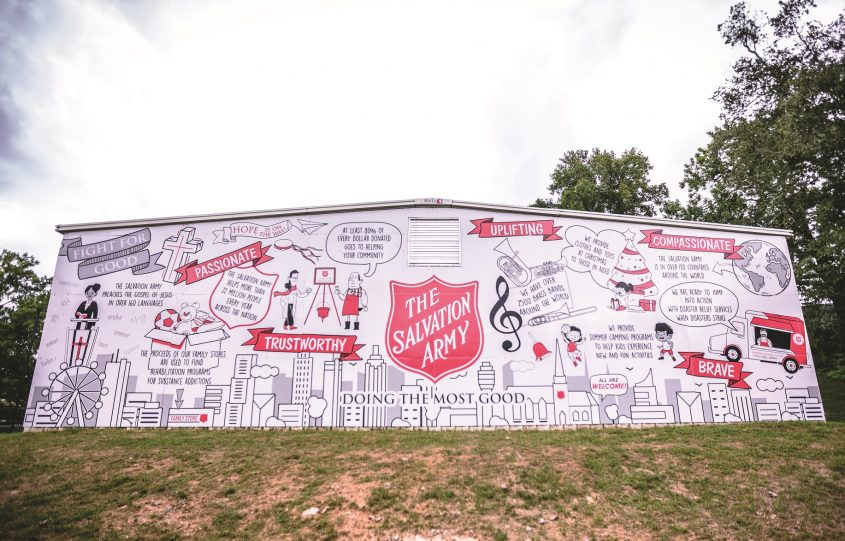 A mural depicting 130 years of Salvation Army history in New Zealand took artist Allan Wrath six hours to create at the Midland Division Youth Councils in 2019. Now that image, “Hope to Generations,” has jumped 8,200 miles to the United States to inspire a similar mural at Southern Territorial Headquarters in Georgia.

Commissioner Willis Howell, territorial commander, read about Wrath’s art-on-the-fly creation in the October 2019 issue of The War Cry for New Zealand, Fiji, Tonga and Samoa. He recommended the artwork to a committee taking suggestions for a wall of a Salvation Army-owned warehouse that faces the recently completed Peachtree Creek Greenway of the city of Brookhaven.

The new mural “highlights so many different aspects of service The Salvation Army is involved with,” said committee member Lt. Colonel Kathy Hobgood, assistant secretary for program and territorial overseas project officer. “It tells our story and shows our church, the Adult Rehabilitation Center, and our social services and camps.

“It’s not big enough to share everything, of course, but one of the comments made was because there’s so much there, maybe one time you’d pass by and notice one part, and the next time you’d walk by and see something fresh and say, ‘Wow, I didn’t know the Army did that.’”

Major Anne Westmoreland, project manager and divisional secretary for women’s ministries in the National Capital and Virginia Division, said, “We wanted to share a positive message and bring hope to the community. People were walking by every day, just looking at that blank wall. They may not have had any idea what was behind that wall – The Salvation Army – and why we do what we do.” 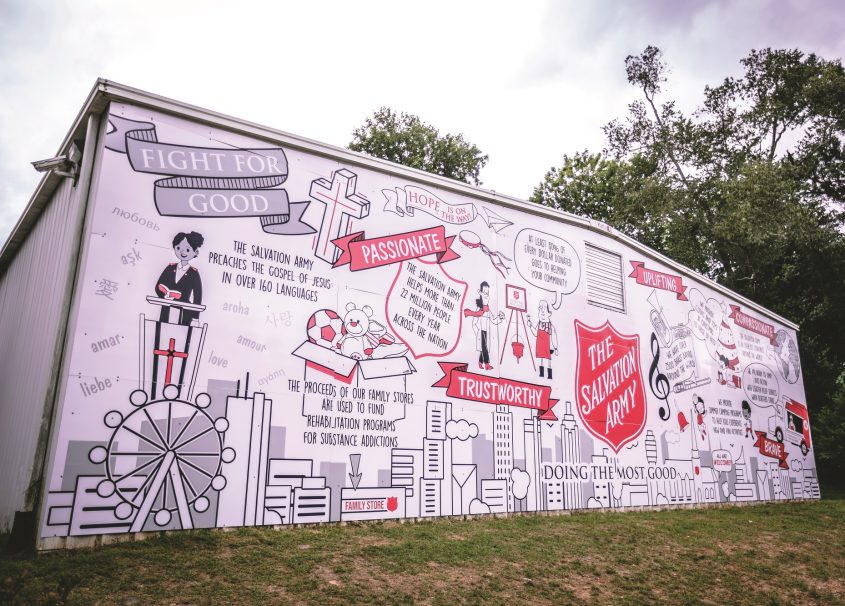 The warehouse, in the lower parking lot of THQ, offered a blank white canvas 55 feet wide by 25 feet tall. THQ put out a call for mural ideas last fall, and 10 proposals were received from four individuals (some accompany this story). In the end, the decision was made to go with an image inspired by Wrath’s.

Sellers is a soldier at the Lawrenceville, Georgia, Corps and owner of A Better Sign LLC, a maker of signs and banners. He had the image transferred to 41 aluminum-covered plastic panels, each measuring 4 by 8 feet, that were then attached to the corrugated-steel side of the warehouse.

The mural was to have been unveiled at the Call to Mission: Southern Territorial Congress in June. The COVID-19 pandemic forced postponement of the congress, but the mural project proceeded, and the artwork was installed in early September.

It lists The Salvation Army’s core values: Passionate, Trustworthy, Uplifting, Compassionate and Brave. It displays the word “love” in different languages, reflecting the Army’s outreach to multi-ethnic communities. It depicts a red kettle, a mobile feeding unit (canteen), brass musical instruments and a box of toys.

“Hope, love and grace; a helping hand, a listening ear; soup, soap and salvation; a hopeful tune; the Word of God – these are just some of the messages shared through the mural. Messages of hope, of inspiration, of new beginnings; and of helping hands, a helping Army that is doing the most good,’” Major Westmoreland said.

Mural candidates were submitted by: 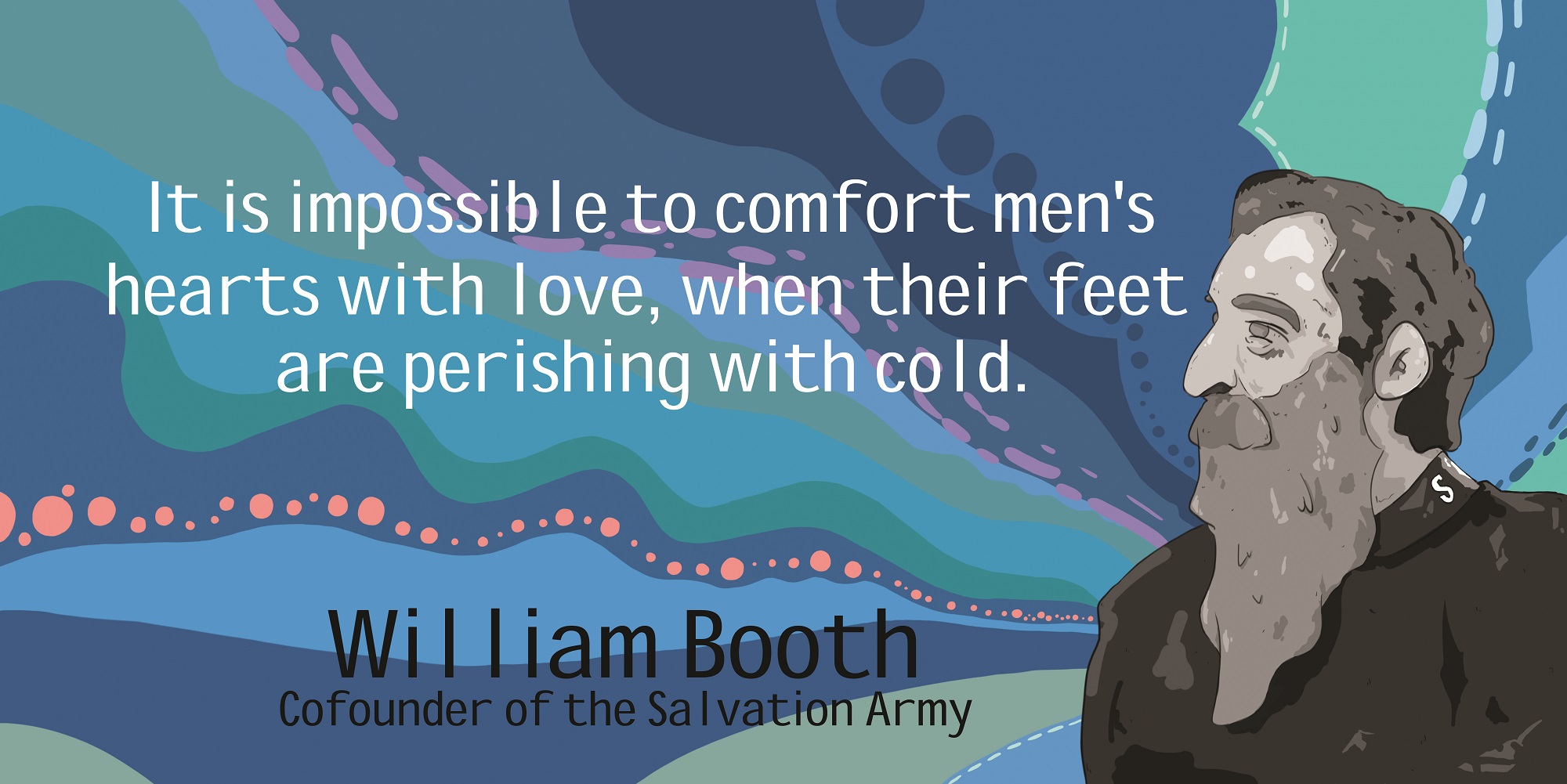 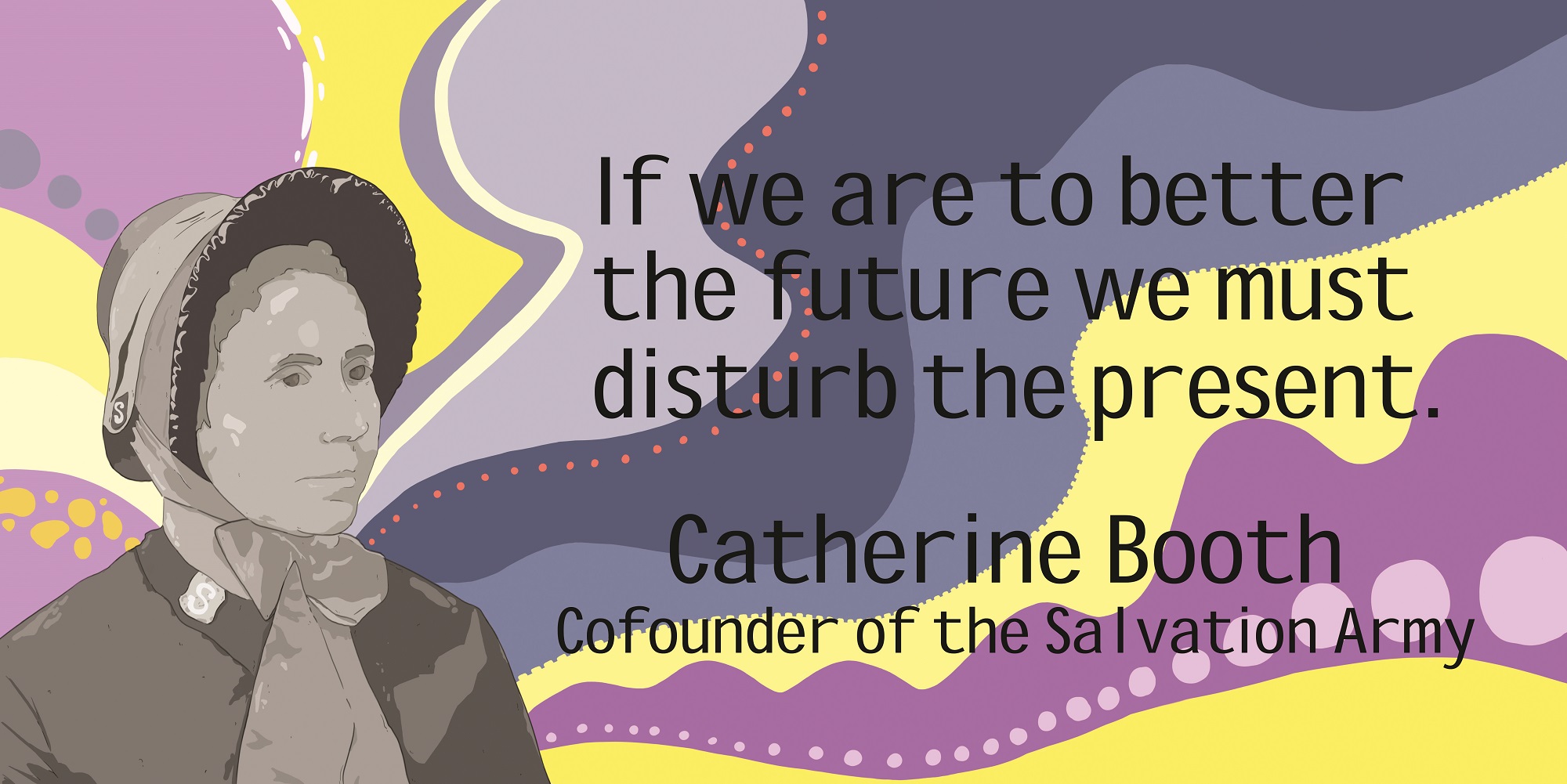 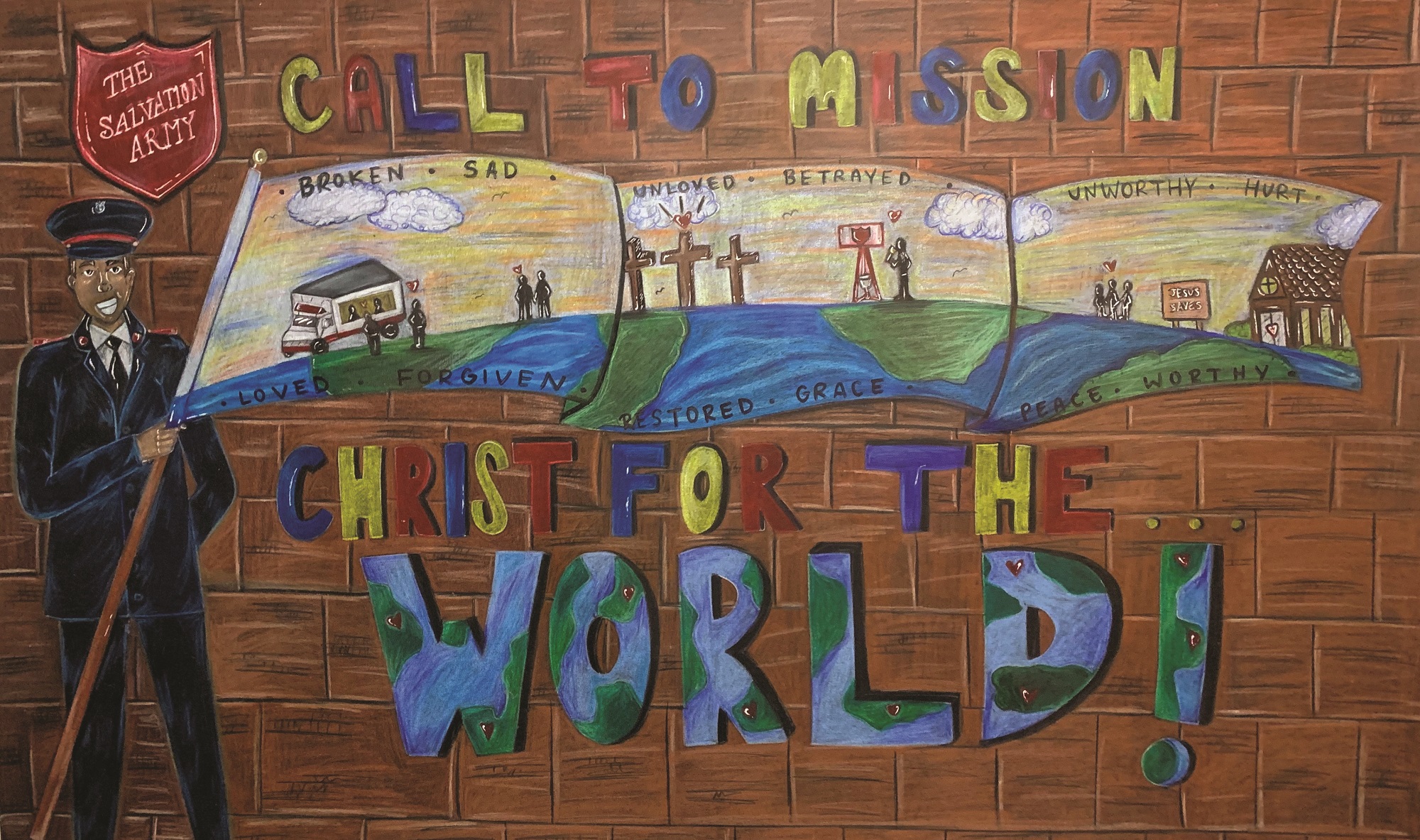 Hartford Hub is Humming Along, Providing Much Needed Food Amid COVID-19 Pandemic

To hurricane survivors, The Salvation Army is a daily blessing

Salvation Army Canteens roll out to bring relief and support in Florida to areas...
%d bloggers like this:
Scroll to top