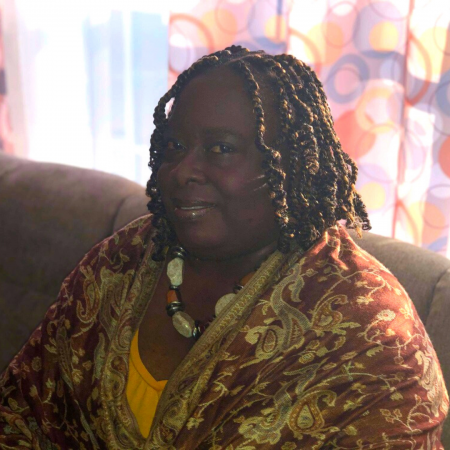 Jacquela and her daughter became homeless at the beginning of 2020 after a home foreclosure. She turned to live with a church member but could not continue those arrangements after a month, so she had to find a new temporary home. She was referred to The Salvation Army of Coastal Alabama Area Command’s Family Haven Emergency Shelter and immediately moved in.

A month later, the pandemic hit, and she lost her job.

The Salvation Army continued to encourage her through months of interviews and bouts of depression. Her stay at the shelter was extended due to the pandemic, and her social workers continued to provide hope and resources. Jacquela also had outstanding utilities that she needed to pay off before moving forward with the housing process to ensure she didn’t end up in a similar situation after finding a new home, so the additional time helped her catch up with financial planning. Although thankful for The Salvation Army, Jacquela initially found herself ashamed of her living conditions.

“Staying in a shelter was embarrassing and shameful to me,” Jacquela said. “At one point, I was looking for extended stay places, but things like that would have put me in a worse situation because I’d constantly spend money on top of money.”

“My family still doesn’t know I’ve gone through this,” she added. “Whenever I would face time, I’d make sure my background was discreet so no one would know.”

Her daughter was in a car accident that totaled their only form of transportation, so Jacquela had to use the money she was saving to replace the vehicle. Her caseworker was understanding and extended her stay even more. Jacquela eventually found employment again as a family engagement coordinator for a nonprofit organization and began saving for a new home.

“They saw that I was trying to do the right thing,” she said. “The Salvation Army was there as a support system. They gave me time to do what I needed to do and didn’t just kick me out because my three months were up.”

“My biggest dilemma was finding housing because I wasn’t able to do the traditional thing of finding an apartment because I was under bankruptcy, so whenever a landlord would look at me on paper, I was financially destitute,” Jacquela said. “I wasn’t able to rent normally, so I was forced to try to find an individual landlord to try to work with them. The same situations I try to help families out of with my job, I now found myself in.”

A Salvation Army employee learned of her troubles finding housing and connected Jacquela with an individual landlord who had properties available. She met with the landlord and explained her situation, and they were willing to give her a chance.

Jacquela moved into her new home in June 2020. The Salvation Army helped with the first month’s rent, allowing time for Jacquela to get ahead with her other finances.

One of the hardest parts of living in the shelter was watching her daughter deal with high school senior year stressors during a pandemic, without the comfort of permanent housing. The entire situation was difficult for Jacquela’s daughter. All senior year celebrations were canceled, including prom, and on top of the stressors of not having her own home, she had to prepare for college. Thankfully, Jacquela was able to plan a graduation party at the shelter to create some type of normalcy for her daughter.

“When I lost my house in foreclosure, I lost everything,” Jacquela said. forming tears. “Not just my house. We literally only had some suitcases. We were vacating the house, but someone broke into our home while we were moving out. We basically left our home with the clothes that we could put in one or two bins. When we left the shelter, we had to start completely over. We lived here for about two months without furniture. We had nothing six months ago. My daughter has been a trooper with me. We go in and are making our house a home—just part of my testimony.

“It is only by God’s grace and mercy. Anything that anyone did is because he put His hands on it, and I believe that He did open doors for us and continues to open doors for us. That is how we survived. I’m thankful.”

“I want people who may be in the same situation that I was in to know that it is nothing to be ashamed of. I thank God for the fact that I was able to live in the shelter and save money.”

(Reprinted from the blog of The Salvation Army Alabama-Louisiana-Mississippi Division. Karyn Lewis is an ALM media relations specialist.)

Messengers of the Kingdom Appointments

To Battle We Go: ‘Maybe you can be one of us’