Salvation Army disaster crews are serving in the extreme northern and southern portions of Minnesota.

In the north, residents of International Falls and greater Koochiching County are preparing for flooding. In the south, residents of Albert Lea and surrounding communities are dealing with the aftermath of wind damage, power outages and flooding.
Here’s a closer look at what The Salvation Army is doing to help.

The Salvation Army is serving food and water to volunteer sandbaggers and relief workers in northern Minnesota as Koochiching County communities prepare for flooding.
County officials suspect Rainy Lake will rise at least another foot in the next day, and if it does, hundreds of homes could be affected.

Envoy Beverly Mayfield, leader of the International Falls Salvation Army, has been serving with Salvation Army staff and volunteers since Friday (read more). “We are providing fuel for the community – three meals a day and all of the snacks and fluids they need to keep going,” she said.

Officials said the situation could be worse than the last major flood that struck the region in 2002, when nearly 140 homes suffered damage.

More rain is forecast tomorrow and possibly through the weekend.

The Salvation Army is prepared to offer clean-up kits to flooded communities, and provide help with financial needs if there is a need and resources allow.

Salvation Army volunteers and staff are responding to the needs of three communities in southern Minnesota by providing immediate nourishment for emergency responders and residents dealing with power outages, wind damage and flooding. Nearly 200 people have already been served in the cities of Maple Island, Alden and Albert Lea.

“The Hollandale Fire Department sent out a few generators on our behalf in Maple Island,” said Captain Jim Brickson, Albert Lea Salvation Army leader. “Our highest concern is for homebound seniors and those with disabilities whenever the power goes out.”

Brickson said their main job has been providing cold water, sandwiches and snacks.
“We have started to see a slowdown and may be able to wrap up our response for today,” he said. “But it looks like there is an 85 percent chance of severe weather expected this evening. That is not welcome news.”

Family honors late son with scholarship fund in his honor 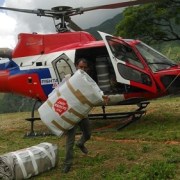