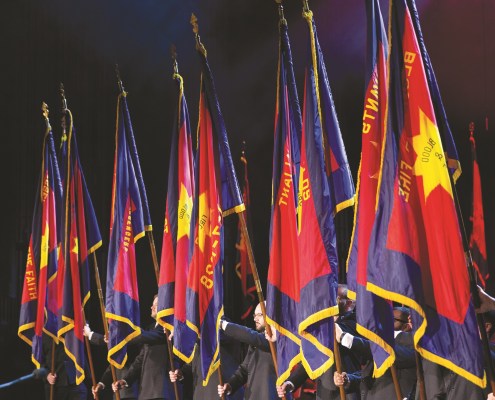 Messengers of the Kingdom set for virtual Commissioning Saturday

Like so many other events of 2020, the Commissioning of the Messengers of the Kingdom has been forced to navigate a detour around the COVID-19 pandemic. Originally scheduled for June 7 as the concluding event of the Call to Mission Congress, the Ordination and Commissioning of the MOK session will take place this coming Saturday, June 13, at the Atlanta Temple Corps.

That’s not all that changed. With a nod to strict social distancing, the meeting will be closed to the public but presented live via the Southern Territory’s YouTube channel at 10 a.m. The Ordination and Commissioning will be the centerpiece event of a weekend that will include the Commencement Service (Friday, 11 a.m.) and the Order of the Silver Star Service (Sunday, 2 p.m.). Those two events, both pre-recorded, will also be made available on YouTube.

Although the weekend’s proceedings be unprecedented, the order of service for the Ordination and of Commissioning will have a distinctly traditional flow. Two of the elements of the service, however, will be a departure from the norm. The Messengers of the Kingdom sessional song, “Hear the Call of the Kingdom,” will be performed as a pre-recorded virtual choir, and the new lieutenants’ exit with their divisional commanders at the service’s conclusion will be a stirring presentation of a video recording that was done on the grounds of Evangeline Booth College. Commissioner Willis Howell, territorial commander, will be the speaker.

Friday’s Commencement will be an hour-long pre-recorded presentation featuring Bill Ury as the speaker. Major Roni Robbins will present diplomas and degrees and Cadet Konstantin Maslenikov will be the MOK session speaker. Concluding the service will be the presentation of the Commissioner’s and Principal’s awards. Other cadet awards usually presented Commissioning Weekend will not be given this year.

The traditional Silver Star Banquet will not be held this year, but a pre-recorded program will nonetheless be aired on Saturday afternoon. Commissioner Barbara Howell will open the program, preceding Cadet Abby Milner, the session speaker, who will pay tribute to the people who played crucial roles throughout her formative years as she progressed toward a life of service as a Salvation Army officer. Commissioner Howell will offer closing remarks.

Camp Kroc returns fun to kids’ COVID-interrupted lives EMBRACE: A covenantal commitment to a journey to end racism
%d bloggers like this:
Scroll to top