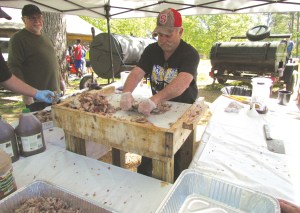 In late April, more than 450 men gathered at Camp Walter Johnson under the theme of “Come Back Home,” and a blessed time of fellowship and activity occurred. The North and South Carolina Division hosted its annual men’s camp with a wide range of activities, including more than 40 sports and leisure competitions. Good-natured battles occurred on the softball and basketball courts, with others spending time fishing, playing air hockey, or engaging in strategic rivalry with chess and dominoes.

Though the recreational aspect is important and outreach-driven, the centerpiece of the weekend was the worshipful gathering in the camp’s chapel. Special guests Bean and Bailey, a comedic and worship-filled musical duo, and transMission, the Southern Territory’s modern worship outfit, helped to bring at atmosphere of worship and first-person accounts inspired throughout the weekend.

Walton Jeanette of Washington, N.C., uplifted those gathered with an energetic testimony of God’s healing, while Lieutenant Zachary Good of Henderson, N.C., shared intimately about the work of Jesus in his life as a Salvation Army officer. In tandem, Ken Brown of Greensboro, N.C., shared, “I’m so grateful that wherever I go, I have a savior that will always bring us back home. I’m thankful for that.” Michael Mott of Goldsboro, N.C., also provided an engaging time of reflection, sharing his story of overcoming anxiety and alcoholism with an eye toward a call to officership.

Major Mark Satterlee, territorial men’s ministries secretary, served as keynote speaker, challenging the men assembled throughout the weekend to be the mentors and role models needed in the community.

“I just want you to know, you’re more important than you think you are,” Major Satterlee said. “The men that made an impact on my life were the men I looked up to in the corps. It doesn’t have to be something where you decide to ‘mentor’ someone, but you have to know that kids are looking up to you and thinking they want to be like you.”

The overarching focus on the story of the Prodigal Son was poignant, with reflection on the central Scripture from Luke 15:11-32. By Sunday morning, the hundreds congregated sang about coming home in unison, knowing that the opportunity was available to do just that, even for those with checkered histories.

“Our hopes and prayers for the weekend was that men would respond to the Holy Spirit and ‘Come Back Home,’” said Major Don Vick, divisional secretary for personnel and organizer of the weekend. “Our focus on the story of the Prodigal Son was a message that related to many of the men and the response at the altar was evident that the message was timely.” 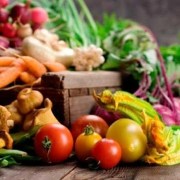 Fresh produce for everyone

JP Morgan Chase Volunteers Give Back to Disaster Relief

The Salvation Army Responds to Mass Shooting in Jacksonville, Florida

The Salvation Army Closely Monitoring Flooding in Areas of Arkansas and Okl...

Tulsa Salvation Army Supports Green Country as Storms Move Across the Area
%d bloggers like this:
Scroll to top