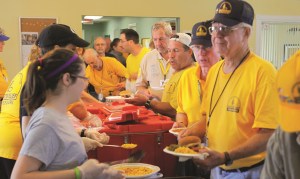 Therapy Dogs International had approached The Salvation Army about a possible partnership in disaster relief. Last year, “during Hurricane Florence, we said, let’s try it – we’ll deploy two dogs with their handlers and see if it works out,” Jeff Jellets said.

The two dogs were so well received at a Wilmington, North Carolina, assistance center where 1,700 people came in for emergency food stamps, the USDA put them on the cover of its newsletter. Now, when The Salvation Army Emergency Disaster Services deploys, you can count on therapy dogs being there, too.

“They’re so good working with kids and helping people open up to an extent they wouldn’t with a human being,” said Jellets, EDS coordinator for the Southern Territory.

Therapy Dogs, Operation BBQ Relief, Midwest Food Bank, Southern Baptist Disaster Relief and House in a Box – to name just a few of many EDS partners – work as a team with The Salvation Army to assist victims of catastrophe.

“For a good partnership to happen, there’s planning and there’s opportunity,” Jellets said. “You can talk a lot about partnerships, but until you get an opportunity to execute it, it doesn’t really become solid. And it has to be a two-way street; both partners have to benefit in some way.”

Operation BBQ Relief was founded in May 2011 to assist relief efforts after a tornado struck Joplin, Mo. Volunteers from competitive barbecue teams from eight states responded to a call for help, serving more than 120,000 meals over 13 days to residents, responders and National Guard personnel.

Today, the organization has 9,000 volunteers from California to Florida and equipment pre-staged around the country. Corporate partners donated the food: frozen meats including turkey, chicken and pork; fresh bread; canned vegetables and dried mashed potatoes and gravy.

A fixed-site operation works well to serve, say, an emergency shelter housing hundreds of evacuees. But how to get sustenance to individuals, families and emergency crews in the field? That’s the job of The Salvation Army and its mobile feeding units (canteens) and rapid response vehicles.

“We’re scaled to be a large feeding operation,” said Paul D. Peterson, head of corporate relations for the Shawnee, Kansas-based BBQ Relief. “We come into a parking lot that’s safe, vacant and has easy access coming and going for both our organizations. Twenty-four hours later, we’re feeding an entire community that’s been devastated by disaster – whether fire, flood, hurricane or tornado.”

BBQ Relief produced 355,000 meals during Hurricane Florence and 759,000 meals after Hurricane Michael. “Our equipment we bring is tailored more for setting up to cook in high volumes, with the distribution arm being The Salvation Army,” Peterson said. “It’s amazing how we complement each other.”

For effective partnerships, Jellets said, “we also have to be compatible with each other from a mission and service delivery standpoint – they’re filling a gap we’re weak in, or they augment a strength we share.”

Southern Baptist Disaster Relief, part of the North American Mission Board, is an example of a like-minded agency with a missional vision. It supports relief efforts of the Baptists’ state conventions and has worked with the Army on nearly every major disaster of the last 50 years.

“We have like missions,” said Eddie Blackmon, disaster response coordinator for the Alpharetta, Georgia-based organization. “It’s just a natural fit for us to support and work with The Salvation Army.”

In additional to the spiritual aspects, Blackmon said, “both of us are very active in mass care feeding and support in disasters. If the Salvation Army’s canteens aren’t enough and they bring in their larger kitchens, we have our volunteers help man some of those larger kitchens.”

The Southern Baptists also have expertise in post-disaster recovery – helping people put their homes, and their lives, back together after a calamity.

Another faith-based partner, Midwest Food Bank, is primarily a supplier of food pantries. It entered disaster services in 2005 during the Hurricane Katrina response. On faith, the food bank sent two truckloads of victuals – each load with about 1,000 boxes of food – to Louisiana not knowing what would happen when they got there.

“We got down there looking for a partner who could use the food,” said Mike Hoffman, procurement and logistics director for the Normal, Illinois-based nonprofit. “The Salvation Army is known for doing the most with the resources they have, so it was an easy decision.”

The Army asked if the food bank could commit to delivering 10 more semis. “At the time, we didn’t have that much food in our warehouse,” Hoffman said, “but our founder David Kieser said we’ll do it. In the end, we got enough food to meet the need – the donations just kept coming it. It’s kind of how God works: You say yes, and he’ll find it for you.”

Today, Midwest Food Bank is a designated First Responder with The Salvation Army; the two organizations use the same, co-branded boxes to distribute food at disaster scenes. “We have three or four loads on the shelf, ready to go,” Hoffman said.

House in a Box is a program of Disaster Services Corp., a Catholic lay organization of the Society of St. Vincent de Paul. It also got started during Katrina, when thousands of families lost everything.

House in a Box assisted more than 700 families after Hurricane Harvey in 2017. Alvin Migues, EDS director for The Salvation Army Texas Division, said the Army aided the effort by providing space in its warehouses for incoming housing kits.

Bertrand said, “The Salvation Army is one of our most valued partners. Wherever we are, wherever they are, if they can assist us in any way, they have been most gracious.”

For these reasons, House in a Box this fall gave The Salvation Army Emergency Disaster Services of Texas its Partner of the Year award.

Which brings us back to Wilmington. Therapy Dogs International sent Jane Willis of Rock Hill, South Carolina, and her black Labrador “Wally,” and Debra Willis (no relation) of Jackson, Ohio, and her black Goldendoodle “Jazz.” They saw partnership in action.

“We were there for a week,” put up in a motel by The Salvation Army, Jane Willis said. “When people are understandably wounded, a dog can help give them emotional comfort. Of course with the children, most kids love to play with dogs. But also, the adults — some people were holding in their emotions, but they’d see a dog and they’d start to cry.”

“We went to the place where all the (relief) agencies were, maybe 30, 40 of them. … Every organization did their bit, and we worked together. There was no division, no fighting, because we had one goal in mind: to help people who’d been in a disaster with whatever our contribution was.”

Inspirational Stories from The Salvation Army in South Georgia

With Tropical Depression Harvey Reforming in Gulf of Mexico, ALM Canteens on Standby

A warm place on a cold night: Knoxville plans low-barrier shelter The Salvation Army helps share love of reading with South Georgia youth
%d bloggers like this:
Scroll to top