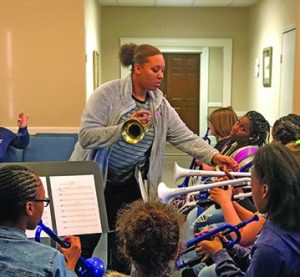 Credit for suggesting an affordable way to let 40 children have their own musical instrument at The Salvation Army in Rome, Georgia, goes to Mia Means, a high school freshman and corps cadet who helps teach music to younger kids.

“Before, we were using regular cornets,” Mia said, “and I was talking to Captain (Jason) Smith about how the cornets were getting scratched and banged up. I was like, why don’t we get plastic trumpets, captain?”

Plastic? No, it’s not a toy. A “pTrumpet” is the real thing, with a brass-type cupped mouthpiece and the working valves and fingerings of a conventional B-flat brass instrument. Manufactured for school use by Warwick Music Ltd. of the United Kingdom, it’s lighter than a metal instrument and available in a wild variety of colors – red, blue, green, yellow and white.

“I had experience with them from school, from the sixth grade,” Mia said. “Captain Smith looked into it, and eventually we got them. They’re so much better because they’re cheaper than regular trumpets, and they play the exact same way and sound exactly the same. Sometimes, on Sunday mornings, I’ll play a plastic trumpet in church to show kids they can do this, too – it’s not hard.”

The Rome Corps Women’s Auxiliary provided a $3,000 grant, and a private donor, $1,000, to pay for the instruments, Captain Smith said. The corps bought 20 pTrumpets and 20 “pBuzz” horns – the latter, a simpler plastic instrument for prekindergarten children. Rather than valves, the pBuzz has a sliding bore like a trombone to change pitch.

“The Trade Department of the Eastern Territory sells them,” said Captain Smith, who with his wife Captain Melissa are corps officers in Rome. “Each horn is played by the principal trumpet player of the New York Staff Band to ensure its quality. Each trumpet comes with a note from the Staff Band saying it meets their standards.”

What are the advantages? “Of course, they’re cheaper – about $125 each as opposed to $500 to $600 for a (metal) cornet or trumpet,” Captain Jason said. “They’re low maintenance. They’re plastic, which means they can handle younger kids who sometimes drop them or ding them on a chair.

“And because of the cost, we can now ensure every one of our music participants has their own horn. Before, they had to share horns, and we had to sanitize the mouthpieces between groups. Now we’re able to issue each child their own instrument.”

Nicholas Simmons-Smith, territorial music secretary, said that his own corps is thinking of purchasing 15 of the instruments and has gotten samples to try out.

At his corps, Simmons-Smith said, “and I am sure for Rome, we have a lot of community kids in our program who need a horn that doesn’t cost a lot and can be dropped and not damaged. These are great horns for beginners, and in this financial climate, very suitable for corps programs.”

Children come to Rome Corps on Monday evenings during the school year for Moonbeams, Sunbeams, Girl Guards and Adventure Corps. They’re served dinner, have a character-building time, and then break up for music. Women’s Auxiliary President Laura Martin, a retired music teacher, takes the pre-K boys and girls, the Moonbeams, and Captain Jason and Mia work with the older kids.

The p-instruments arrived in February and were immediately put to use. The corps plans to start the youngest children on the pBuzz and, after kindergarten, move them on to music theory and pTrumpets and, ultimately, conventional brass instruments like cornets and baritones.

Captain Jason said, “Our hope is our children will be able to feed into the junior music conservatory program at Camp Grandview,” the Georgia Division overnight camp, “and help children in the city and county schools decide if they want to be in a school band program in the sixth grade.”

Captains Smith came to Rome about three years ago and have grown the Monday night children’s program from about eight youngsters initially to an average of 40 currently.

“We’re hoping to see the program grow,” Captain Jason said. “We’re kind of at capacity now with our building and transportation, but we’d love to see this grow into a really robust conservatory program that can be held throughout the year.”

The Salvation Army Mobilizes for Flood Assistance in Texas

To Battle We Go: ‘Improvise, adapt and overcome’

A young Girl Scout with a big heart offers a bit of joy to people in need
%d bloggers like this:
Scroll to top