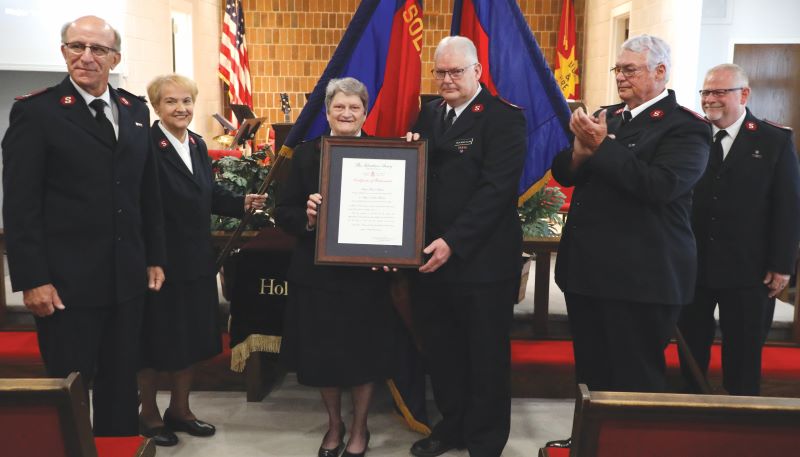 Celebrating “Joy In Our Journey,” Majors Brian and Loretta Gilliam were saluted during a Sunday worship service at the Hendersonville, North Carolina, Corps, attended by family, friends, corps members, volunteers and advisory board members. The retirement ceremony had to be moved from one month earlier due to the COVID-19 shutdown.

Majors Brian and Loretta were childhood friends and sweethearts at their home corps in Weirton, West Virginia. They entered Evangeline Booth College two years apart, and were married on June 11, 1977, after both had been commissioned. For the two years between Loretta’s commissioning and their marriage, she served in Augusta and Columbus, Georgia.

As a married couple, they were corps officers in Moundsville, Martinsburg, Bluefield, and Parkersburg, West Virginia; Baltimore (South) and Salisbury, Maryland; Memphis (Ben Lear), Tennessee; Henderson, Kentucky; Tuscaloosa, Alabama; Tampa, Florida; and Hendersonville, North Carolina. On the training college staff, they served as field training officer and Family Life Center director from 1997-1999. They moved from there to Nashville, Tennessee, as area commanders from 1999-2003, then on to divisional staff appointments in Texas from 2005-2013.

An outstanding teacher and proponent of the Word, Major Brian was a member of the National Seminar on Evangelism faculty from 2010-2015.

My Coronavirus Story: Lieut-Colonels Seth and Janet Appeateng, Rwanda and B...